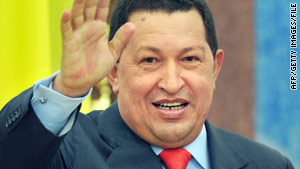 (CNN) -- Two measures that critics say will give Venezuelan President Hugo Chavez more leeway to clamp down on opposition voices were approved by the Venezuelan National Assembly.

One of the most controversial amendments to the telecommunications law, which would have created a government-run internet hub, had been stripped from the bill earlier. Critics said that a hub could be used as a government filtering tool.

Another change in the law seems aimed at opposition broadcaster Globovision, and could limit its transmission to two areas.

The social responsibility media law, meanwhile, was amended to bring internet providers within its jurisdiction.

The reformed law will split the day into periods, with restrictions on what language, sexual content and violence can be broadcast at certain times.

It also explicitly states that no broadcaster or internet provider can broadcast things that incite hate, cause "anxiety or unrest among the public order," or promote the assassination of leaders.

The law states that internet providers must have mechanisms that, at the request of telecommunications regulator, could restrict messages and access to websites that break laws.

"With the new rules for the Internet, among fines for service providers and the requirement that users not write anonymously or touch on issues that the government might not like, we are witnessing a deep and generalized censorship of news content and personal communications which goes against journalists' and media's right to publish and amounts to contempt of the public's right to communicate freely," IAPA President Gonzalo Marroquin said in a statement.

Lawmaker Manuel Villalba, a Chavez supporter in charge of the commission on science, technology and media, said that the passage of the laws demonstrates that the Venezuelan government is committed to freedom of expression.