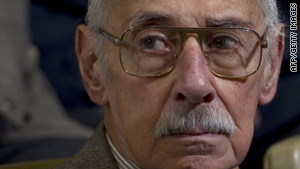 (CNN) -- Former Argentine dictator Jorge Rafael Videla was convicted and sentenced to life in prison by a federal court Wednesday for human rights abuses during his rule.

Videla was among the coup leaders who overthrew then-President Isabel Martinez de Peron in March 1976. He ruled as dictator until 1981.

In a separate proceeding, Luciano Benjamin Menendez, former head of the Third Army Corps, was also sentenced to life in prison for violating the human rights of four people.

Up to 30,000 students, labor leaders, intellectuals and leftists who ran afoul of the dictatorship because of their political views disappeared or were held in secret jails and torture centers during the nation's eight-year "dirty war."