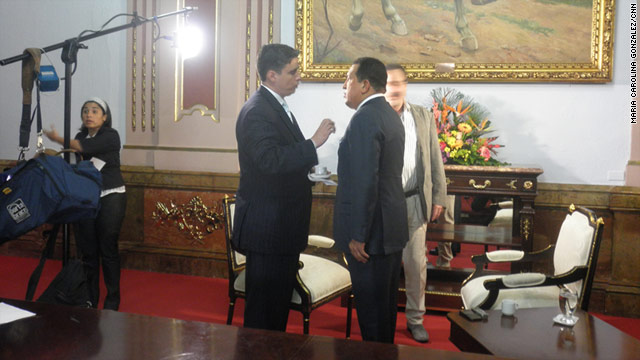 "It could be a license to crack down on any kind of dissent in the media," said Padraig Reidy of Index on Censorship, a leading British freedom-of-speech organization.

And because the laws are ambiguous, they "can chill legitimize activities exercised by minority groups, human rights organizations, dissidents, protesters. Those activities are essential to democracy," said Katitza Rodriguez of the Electronic Frontier Foundation.

The Venezuelan National Assembly approved changes to the Organic Telecommunications Law and the Social Responsibility on Radio and Television Law on Monday.

The social responsibility law explicitly states that no broadcaster or internet provider can broadcast things that incite hatred, cause "anxiety or unrest among the public order" or promote the assassination of leaders.

Under the law, internet providers must have mechanisms that, at the request of telecommunications regulator, could restrict messages and access to websites that break laws.

Reidy, the news director of the Index on Censorship, expressed concern about how the law is written.

"What particularly worries me is that the phrasing (of the law) is so broad -- lines about 'fomenting anxiety' and 'altering public order,' " he said.

"What exactly does altering public order mean? Does it mean trying to put alternative views to the government's? That could be very dangerous," said Reidy.

"Venezuela has independent media which is openly hostile to the government. They should have a right to be openly hostile," he said Reidy.

Rodriguez, the international rights director of the Electronic Frontier Foundation, has other worries as well.

She's concerned that internet service providers can now be penalized for material people upload to websites they host.

"These measures are very bad for freedom of expression. They affect the work of dissidents, of human rights activists on the ground trying to mobilize a campaign," she said.

And the law can encourage internet service providers to bar users from posting their own videos, photos, links or comments so the companies hosting them don't run afoul of the law, she said.

They might start monitoring communications to protect themselves, she said.

"Internet intermediaries will be forced by fear of liability to monitor or surveil all communications passing through their networks and platforms, and might design their technologies to restrict their users from uploading certain sorts of content," she said.

"This, in turn, will limit citizens' freedom of expression and violate their privacy," she warned.

One of the most controversial amendments to the telecommunications law, which would have created a government-run internet hub, was stripped from the bill before it passed.

Critics said that a hub could be used as a government filtering tool.

The social responsibility media law was amended to bring internet providers within its jurisdiction.

The law will restrict what language, sexual content and violence can be broadcast at certain times.

The Miami, Florida-based Inter-American Press Association condemned the changes on Tuesday, saying the represented "a deep and generalized censorship of news content and personal communications."

That "goes against journalists' and media's right to publish and amounts to contempt of the public's right to communicate freely," IAPA President Gonzalo Marroquin said in a statement.

Lawmaker Manuel Villalba, a supporter of Venezuela's President Hugo Chavez, said that the passage of the laws demonstrates that the Venezuelan government is committed to freedom of expression.