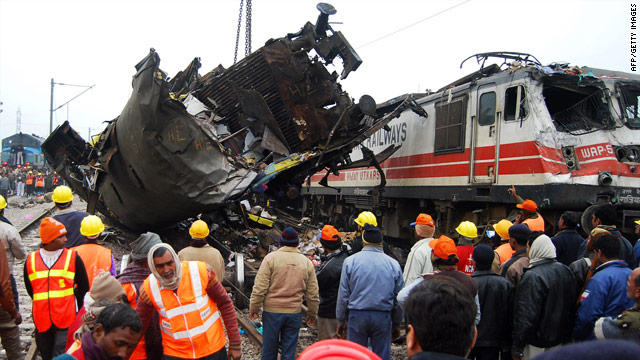 A damaged coach is moved from the wreckage Saturday after a deadly collision near Kanpur, India.
STORY HIGHLIGHTS
RELATED TOPICS

The accident happened near the city of Kanpur when a train rear-ended another, said railway spokesman Anil Saxena. At least 42 people were injured and 19 were in critical condition, Saxena said.

Another train collision happened in the same state of Uttar Pradesh in the space of about an hour, Saxena said, but no one was injured.

Thick winter fog enveloped parts of northern India on Saturday. There also were power outages in the region.

"Fog is one of the main culprits," Saxena said.

The Kanpur wreck occurred after a power outage stopped the first train, Saxena said. A second train rammed into it, apparently because of poor visibility.

The rail system is testing anti-collision devices on trains in the country's remote northeast, Saxena said.