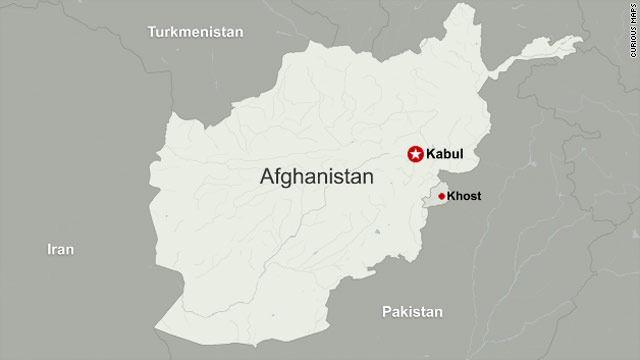 The bomber came to the base camp in Khost near the Pakistan border, a senior U.S. official said.
STORY HIGHLIGHTS

Amman, Jordan (CNN) -- The brother of the suicide bomber who killed eight people at a U.S. base in Afghanistan last week told CNN his sibling's actions were "out of character" and that the man was "under pressure."

The man's father, who is shocked by his relative's actions, said he was called by an Afghan speaking in broken Arabic from Afghanistan. The Afghan told him his son was dead and that he died as a hero in an operation to kill CIA agents.

The caller said, according to the father, the circumstances could make problems for his family and that they will have to cope with it.

But the caller told the man's father his son was a hero. The brother and father spoke to CNN's Nic Robertson.

The suspected suicide bomber left Jordan a year ago for Turkey to finish his medical studies, but his family realized three months later he wasn't there, relatives said. The family didn't know whether the Afghan caller was from al Qaeda but believes it was some militant group.

A Jordanian official, speaking on condition of anonymity, had said authorities in Jordan arrested al-Balawi more than a year ago "for some suspicious information related to him" but released him due to lack of evidence.

"After (a) few months, he got in touch with us through the Internet and sent us several e-mails that include very important and rather dangerous information that might affect the security and stability of the country," the official told CNN.

The official said Jordan could not confirm that al-Balawi was the bomber, "because we are not on the ground."

"But we are not denying that if he is the one, then he is the Jordanian doctor," the official said.

U.S. sources said bin Zeid was the Jordanian operative working closely with al-Balawi, who was from the same hometown as the onetime leader of Al Qaeda in Iraq, Abu Musab al-Zarqawi.

Jordanian and U.S. intelligence agencies apparently believed al-Balawi had been rehabilitated from his extremist views and were using him to hunt Ayman al-Zawahiri, al Qaeda's No. 2 figure, the former intelligence official said.

Former CIA official Robert Richer called the bombing the greatest loss of life for the agency since the 1983 bombing of the U.S. Embassy in Beirut, Lebanon, which killed eight agents.

An American intelligence official vowed last week that the United States would avenge the attack.

CNN's Nic Robertson and Caroline Faraj contributed to this report.