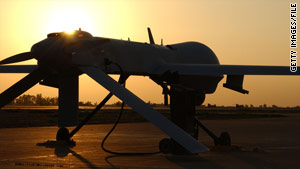 The U.S. is the only country operating in the region known to have the ability to launch missiles from drones.
STORY HIGHLIGHTS
RELATED TOPICS

The strikes are the fourth and fifth suspected drone strikes in less than a week, and come after a suicide bomber killed seven Central Intelligence Agency officers and contractors on December 30.

The first incident took place around 3:50 p.m. and the second just over an hour later, apparently targeting militants who gathered at the scene of the first attack. One source said 13 had been killed, and another put the number of dead at 14.

The strikes took place in the Sanazala area of the Dattakhel subdivision of the North Waziristan region, the largely autonomous tribal region near the border with Afghanistan.

The area has been the scene of heavy fighting between Pakistani military forces and the Taliban, the Islamic militia that also is battling U.S. forces in Afghanistan.

Suspected drone strikes took place about once every week to 10 days in October and November, according to records kept by the Center for American Progress, a Washington think tank.

The U.S. military routinely offers no comment on reported attacks by drones, or unmanned aircraft. However, the United States is the only country operating in the region known to have the ability to launch missiles from remote-controlled aircraft.

Journalist Nasir Dawar in Peshawar contributed to this report.