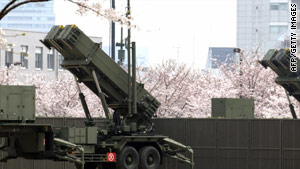 Beijing, China (CNN) -- China has complained to the United States about the sale of advanced Patriot air defense missiles to Taiwan, which Beijing does not consider an independent legitimate state.

The sale of the missiles by Lockheed Martin, announced Wednesday in Washington, will undermine Sino-U.S. cooperation and will have severe consequences, China said.

"China firmly opposes and is strongly dissatisfied with arms sales to Taiwan by the United States," Foreign Ministry spokeswoman Jiang Yu said in a statement published Thursday by the state-run Xinhua news agency.

"We do make available to Taiwan defense articles and services necessary to enable Taiwan to maintain a sufficient self-defense capability pursuant to the Taiwan Relations Act, and we will continue to do that," Crowley said at a Thursday news briefing in Washington.

Jin Canrong, deputy dean of the International Studies School at Renmin University of China, told China Daily that Beijing is nearly certain to retaliate against the United States if the deal is consummated.

"It is likely to freeze military exchanges. It will make the U.S. very uncomfortable because of all the world's strategic military powers, the U.S. is most eager to learn about the [People's Liberation Army]," Jin is quoted as saying.

Rear-Admiral Yang Yi of the Institute of Strategic Studies of the National Defense University was quoted as saying China needs to sanction the U.S. arms companies behind the deal.

"When it comes to a question of principles, we should never make concessions," he said.

Some U.S. companies that sell weapons to Taiwan also want to sell aircraft and other goods to China, added Yang, without naming any firms.

"Why don't we take defensive countermeasures against them?" he asked. "Apart from just protesting to the U.S. government, why don't we impose sanctions on these troublemakers?"

Many Western nations and the United Nations recognized Taiwan as the legitimate Chinese government until 1971.

China considers Taiwan as a breakaway province and does not recognize it as a sovereign nation.