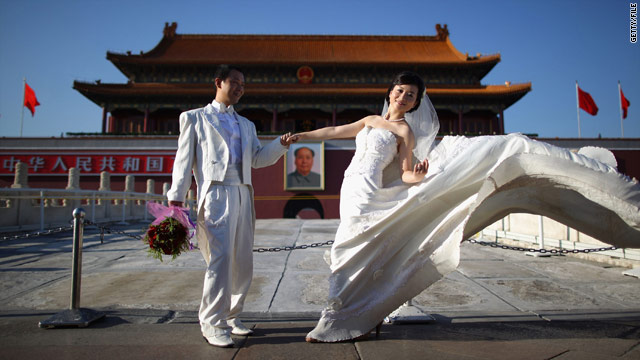 (CNN) -- Some 24 million Chinese men of marrying age will find themselves lacking wives in 2020, partly because of the country's one-child policy, which has led to the abortion of female fetuses, state media said Monday.

Sex-specific abortions have led to a large male population born since the 1980s, the China Daily newspaper said, citing a study conducted by the Chinese Academy of Social Sciences.

The gender imbalance means that the next decade will see many intergenerational marriages: young men married to women much older than them, the study said.

China's Communist Party implemented the one-child rule three decades ago, amid fears that the country would not be able to feed a skyrocketing population. The policy has prevented about 400 million births, China Daily said.

Couples living in cities are barred from having more than one child, unless neither parent has siblings. In rural areas, the law allows for a second child under certain circumstances. And the guidelines are looser for ethnic minorities with small populations.

Enforcement varies, but usually takes the form of fines to discourage extra births.

The policy has curbed population growth, and has led to forced sterilization in some parts of the country, the U.S. State Department said. Because of a traditional preference for male heirs, many Chinese also have aborted female fetuses, according to human rights groups.

Even within the country, calls to overhaul the law have increased in recent years, China Daily said.

But China has said it will maintain its one-child policy for at least another decade.

Nearly 200 million Chinese will enter child-bearing age in the next 10 years, Minister Zhang Weiqing told China Daily two years ago. He said abandoning the policy during this period would cause "serious problems and add extra pressure on social and economic development."

"After the new birth peak ends, we may adjust the policy if there is a need," he said.

China's population, which stands at about 1.3 billion, is growing at the rate of 0.6 percent. It is expected to peak around 1.6 billion by 2050, the U.S. State Department said.