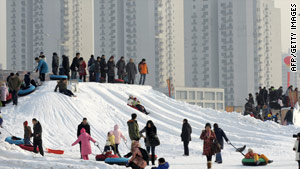 Nearly 300 casualties had been reported and at least 960,000 people had been affected, the Xinhua news service said, without clarifying the figures. It also reported that 16,000 houses had been destroyed.

A new wave of cold gripped the region on Monday, with temperatures well below freezing.