Coming to Milwaukee: A Chinese mega-mall? 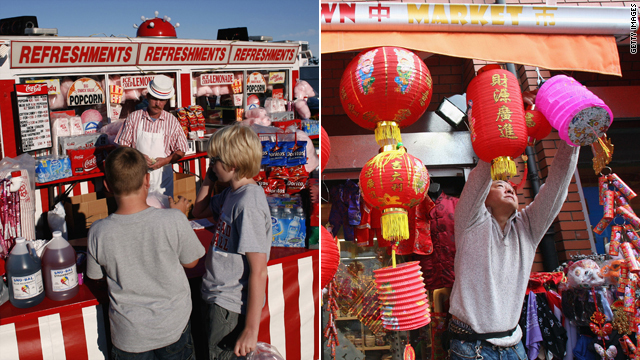 A Beijing company has bought a MIlwaukee mall to turn the center into a gateway to sell Chinese products in the U.S. Midwest.
STORY HIGHLIGHTS
RELATED TOPICS

Beijing, China (CNN) -- A Beijing-based company will soon open a Chinese-style mega shopping mall in the most unlikely of places: Milwaukee, Wisconsin.

"The cost of doing business there is very low," said Wu Li, president of Toward Group. "The people are friendly, the environment is peaceful and the pace of living is slow. It is a good place for Chinese enterprises to go abroad."

Loaded with cash, credit and encouraged by the government to expand overseas, Chinese companies have been investing in property abroad at an increasingly rapid clip. While most are purchasing properties in traditional commercials centers like New York, few have ventured into the Rust Belt -- until now.

"Americans should be prepared that more Chinese investors will buy up commercial real estate in the United States in 2010 to take advantage of low valuations in an improving economy," said Shaun Rein, managing director of China Market Research Group, a Shanghai-based market intelligence firm. "It could be a huge trend."

A 2009 China Market Research Group study found that 80 percent of 100 Chinese companies surveyed plan to capitalize on property discounts abroad as a result of the financial crisis.

Last month, Wu's company announced it snagged the Northridge mall, a dormant shopping complex in northwestern Milwaukee that was built in the 1970's, for $6 million. The company plans to open the mall, renamed AmAsia, in August.

The Japanese also famously purchased U.S. commercial properties -- such as New York's Rockefeller Center and Pebble Beach Golf Course in California -- while its economy was on the rise.

"Did any of them turn out well?" said Steven Dickinson, a China-based lawyer with Harris & Moure, an international business firm. "No, they turned out bad. Because the Japanese were idiots? No. It just didn't work out. What does that suggest for the Chinese? Well, I won't say, but that has been the history."

Dickinson advised Japanese firms that bought a spate of American "trophy malls" in the late 1980's, a period when a strong yen and growing global influence encouraged the country to invest overseas, particularly in an overvalued U.S. commercial property market.

"You go into a place like Milwaukee, and you have a country that has no clue what people in Milwaukee want in a mall and when they buy it the first thing they do is change it to run like a Japanese mall or a Korean mall or a Chinese mall," Dickinson said. "Well nobody wants to go and then they bail." A Chinese mall is exactly what Wu envisions for Milwaukee.

He is recruiting retailers from Beijing and Ningbo, a seaport in northeastern China that is also Milwaukee's sister city, to fill the AmAsia Plaza by August. He is offering six months free rent as an incentive. Two potential candidates include Beijing Wu Yu Tai Tea Company Ltd. and Tong Sheng He, a shoe shop.

The goal, he says, is to help Chinese brands boost their image in America while enabling American businesses to connect directly with Chinese wholesalers without having to go through a middleman.

"It is only a matter of time for the U.S. to recognize Chinese products are high quality," he said. "[The mall] will represent the highest levels of Chinese manufacturing."

AmAsia will also feature exhibitions to "show off the rich culture of China."

"One month there will be Chinese painting, another month Peking Opera or traditional dance from Yunnan province," Wu said. "Our hope is that it will become a tourist destination for local and regional communities."

Wu says he will hire a local mall management firm to operate the facility in part to benefit the local economy and also to help Chinese learn American techniques of shopping center administration, an area of expertise that remains relatively weak in China where many retail spaces are often poorly run.

But will Milwaukeeans want to go there?

"Most things made in China, if it is edible or made out of material, people won't buy around here anymore," said Joe Fall, owner of Culver's, a burger joint a few miles away from the shopping center.

"All of the scandals that have erupted through lax manufacturing ... when I hear made in China, I think twice," he said

Others are more optimistic about prospect of new Chinese neighbors.

It is only a matter of time for the U.S. to recognize Chinese products are high quality
--Wu Li, the Toward Group

"I think it is going to be very successful," said Bob Kraft, a Milwaukee Chamber of Commerce board member and chairman of RCI FirstPathway Partners LLC, a firm that helps foreigners who invest in U.S. ventures.

Kraft said he is exploring some sort of business partnership with Toward Group on the project but declined to disclose details. He added that Milwaukee has "a lot more Chinese investors in the pipeline who are coming."

"There is no Chinatown or Chinese destination in the state," Kraft said. "I think the timing is perfect for it."

Chinese investors have mostly been looking for deals in major cities, like New York, where the amount of available office space has increased by 16 million square feet in some areas, according to brokerage CB Ellis Group Inc.

"One characteristic about Chinese investment is it tends to be very opportunity driven," said David Hand, head of investments for Jones Lang LaSalle China. "So markets which have fallen the most -- the U.S. and the UK -- have been very attractive as opportunity buys."

Vantone, the first private firm to lease space in the building, plans to open its five-floor China Center as a hub for Chinese corporations developing operations in the U.S. when construction of the $3 billion tower is completed in 2013.

The Chinese have also been investing in U.S. properties via distressed asset funds, buying up foreclosed housing and seeking stakes in automobile and energy companies.