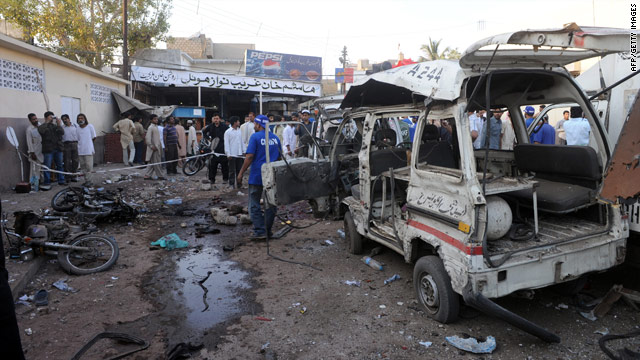 The second bomb was detonated outside the emergency room of Jinnah Hospital on February 5, 2010.
STORY HIGHLIGHTS
RELATED TOPICS

Islamabad, Pakistan (CNN) -- A blast targeting a bus filled with Shiite religious observers in Karachi killed at least 12 people and another explosion in front of a hospital where attack victims were being treated killed six more Friday, a government official said.

Motorcycles were used in both assaults, police said, and they came during the Shiite observance of Arbaeen, a commemoration that takes place 40 days after the anniversary of Iman Hussein's death, which is also known as Ashura.

Sindh provincial health minister, Dr. Saghir Ahmed said that along with the 12 dead, 30 people were injured in the first blast.

The second blast happened in front of the emergency room at Jinnah Hospital, where doctors treated people from the first attack and people on stretchers were waiting to be taken in to the crowded facility. Along with the six slain, five people were wounded.

The last deadly blast in Karachi took place late December during Ashura, when more than 40 people were killed.