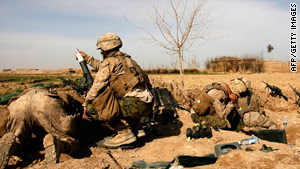 U.S. Marines fire a mortar as they battle insurgents in the northeast of Marjah on Friday.
STORY HIGHLIGHTS
RELATED TOPICS

The bodies were discovered during an operation by Afghan and NATO-led forces in Paktia province, a volatile region along the border of Pakistan.

NATO's International Security Assistance Force said the bodies of two men and two women were found, with the women bound and gagged, and the U.S. official said the people were shot "execution-style."

An honor killing is a murder carried out by a family or community member against someone thought to have brought dishonor onto them.

The U.S. official said it isn't clear whether the dishonor in this case stemmed from accusations of acts such as adultery or even cooperating with NATO forces.

"It has the earmarks of a traditional honor killing," said the official, who added the Taliban could be responsible.

Afghan and NATO officials are investigating the incident, which occurred in the village of Khatabeh in the province's Gardez district.

The operation unfolded when Afghan and international forces went to the compound, which was thought to be a site of militant activity. A firefight ensued and several insurgents died, several people left the compound, and eight others were detained.

Paktia is the same province where a military base was the target of an assault that wounded five U.S. soldiers on Thursday, authorities said. Both the U.S. official and a Paktia province spokesman confirmed that a suicide attacker, apparently wearing police garb, carried out the action.

The U.S. official said it may never be fully determined if the uniform was stolen or the bomber was a turncoat.

On December 30, a suicide attack on a U.S. base in Afghanistan killed seven CIA officers and a Jordanian army captain. The Pakistani Taliban claimed responsibility for the attack, also on a base in eastern Afghanistan.

The deaths occurred during an operation in Farah province targeting a Taliban commander thought to be responsible for planning suicide attacks, the military said.

When a militant threw a grenade at troops approaching a building, the forces called for his surrender, it said. The troops tried to enter the building when the militant detonated a suicide vest.

After that blast, a large number of armed militants tried to confront troops, who killed the insurgents, the military said. One alleged militant was injured and five were detained, it said. Troops found weaponry, such as grenades, firearms and handheld radios.

Farah borders Helmand province, where international and Afghan troops are gearing up for a major assault on the Taliban.