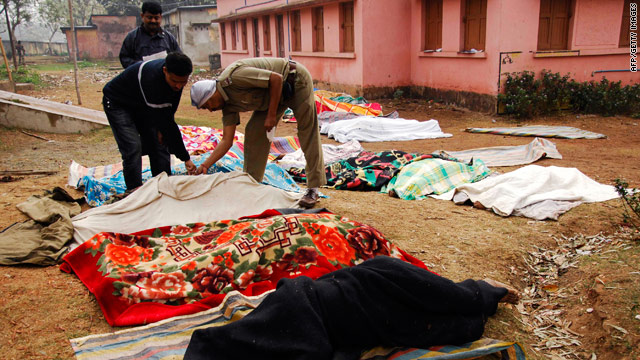 New Delhi, India (CNN) -- At least 24 paramilitary troops and a civilian were killed in an armed assault on their camp by suspected Maoists in eastern India, a district official said Tuesday.

Top district official Narayan Swaroop Nigam told CNN that the raiders arrived on different types of vehicles and that they were equipped with sophisticated self-loading weapons.

He insisted that Indian troops retaliated with fire. Two attackers apparently died, but their bodies had not yet been recovered, Nigam said.

"Security forces have combed the area and a manhunt has been launched," he added.

India regards the communist rebels as its gravest internal security threat. The Maoists, on the other hand, have claimed since the 1960s to be fighting for the dispossessed.

Just about a week ago, India's Home Minister P. Chidambaram acknowledged that more than 900 people, including almost 600 civilians, were killed in Maoist-related incidents in 2009. Besides, some 200 suspected rebels were also slain as forces moved into areas under insurgent control, he said.

"However, I am confident that the state governments concerned will gradually gain the upper hand and re-establish the authority of the civil administration," Chidambaram told an internal security conference on February 7.

Maoists enjoy support not only in the poorest and tribal communities but also among youth and the intelligentsia, officials suspect.

"We have not achieved as much success as we would have liked in containing this menace," Singh said in September 2009. "It is a matter of concern that, despite our efforts, the level of violence in the affected states continues to rise."