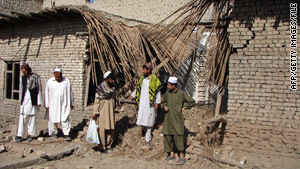 Islamabad, Pakistan (CNN) -- The son of the leader of an al Qaeda-linked militant group was killed Thursday night in a suspected U.S. drone strike in Pakistan, officials said.

Muhammad Haqqani, son of Jalaluddin Haqqani, was one of the four people killed in the drone strike on a militant compound in Pakistan's tribal region in North Waziristan, according to two Pakistani intelligence sources.

The sources asked not to be identified because they are not authorized to speak to the media.

Muhammad Haqqani was a commander in the Haqqani network, the sources said. The Haqqani network is an al Qaeda-linked militant group based in Pakistan's tribal region and is accused of targeting U.S. and international forces across the Afghanistan border. It is closely allied with the Taliban, sources say.

U.S. intelligence officials have said they consider the Haqqani network one of the greatest threats to U.S. forces in Afghanistan.

U.S. officials normally do not comment on suspected drone strikes, which have caused tension between Pakistan and the United States in the past.