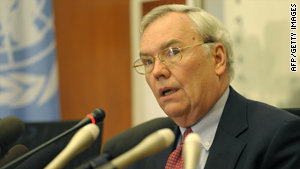 "These are human beings that need the food. It's not the political system. This shouldn't be argued in a political way," U.N. Under-Secretary-General for Political Affairs Lynn Pascoe told CNN's Christiane Amanpour on Monday.

He said the United Nations is giving nutritional supplements to as many as 1.3 million of North Korea's 24 million people. But the U.N. World Food Programme has estimated that more than a third of the population needs food aid.

Pascoe, who earlier this month was the first top-level U.N. official to visit North Korea in six years, said, "There clearly is malnutrition at younger ages, so we're trying to help them with fortified food and up through the schools so that they can eat. There also was a very large program on immunizations for the children."

"Our problem is we don't have enough money coming in now to sustain some of those programs. ... But the truth of the matter is, we need to do more because these are people."

Pascoe insisted the United Nations can account for the food aid: "Our people believe they have a very clear idea of who's using the food, where it's going, and it's really for the good of the people who need it most."

He added that North Korean officials have talked a lot about wanting some kind of peace treaty that would formally end the 1950-53 Korean War, a conflict that concluded with an armistice.

But North Korea, in public at least, seems determined to maintain a hard line, refusing to rejoin six-nation talks on its nuclear program that it abandoned last year. Those talks also include South Korea, the United States, China, Russia, and Japan.

Last week, Pyongyang appeared to reject the idea of receiving economic aid in return for dismantling its nuclear program. The official Korean Central News Agency said the nation would not abandon nuclear weapons "unless the hostile (U.S.) policy toward (North Korea) is rolled back and the nuclear threat to it removed."

A leading expert on North Korea, Sung-Yoon Lee, an adjunct assistant professor at the Fletcher School of Law and Diplomacy at Tufts University in Massachusetts, said North Korea's real goal is to have a peace treaty that drives American troops out of the Korean Peninsula, which would "tilt the balance of power for the short term in North Korea's favor."

"They say this quite explicitly, that (their goal) is to build a communist state in the entire Korean Peninsula, and unless there should be any ambiguity, they do spell it out", he added. "They say that means roll back U.S. 'imperialist forces' from South Korea and end the U.S. 'colonial occupation' of South Korea."

But Lee said North Korea is an inherently unstable country that's on the precipice of economic collapse and whose leader is certain to pass.

"Kim Jong-Il is mortal. His time will come to an end," he said.