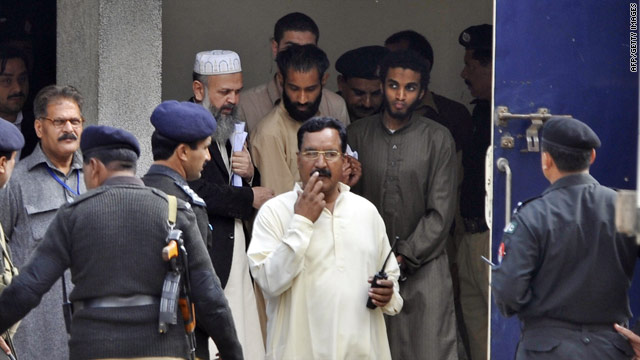 The charges include waging war on Pakistan and funding banned terrorist groups, said defense attorney Dastgir Katchela. The five could face up to life in prison if convicted, he said.

Ninety percent of the prosecution documents are in the Urdu language, which his clients cannot read, Katchela said.

"I raised this issue before the court, but the court ordered me to translate these documents for my clients," he said. That will take more than a week, he added.

The five men worshipped together at a mosque in Alexandria, Virginia, until they went missing in November and turned up in Pakistan. They were arrested in December in the small city of Sargodha, about 120 miles south of Islamabad.

They have said that they are being tortured in jail. Last month, they wrote their claims on tissue paper that they threw to reporters from a van that drove them to a court hearing.

"Since our arrest, the U.S.A., FBI and Pakistani police have tortured us," they said. "They are trying to set us up. We are innocent. They are trying to keep us away from the public, media, our families and our lawyer. Help us!"

The suspects consist of two Pakistani-Americans, two Yemeni-Americans and an Egyptian-American.

Pakistani authorities have described the men as college students who "were of the opinion that a jihad (holy war) must be waged against the infidels for the atrocities committed by them against Muslims around the world."

The next hearing is scheduled for March 10, when the five Americans will be formally charged.