Terror threat issued for tankers in Strait of Malacca 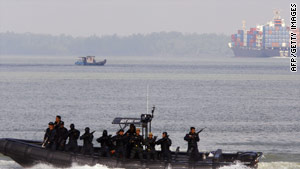 Malaysian authorities carry out an anti-piracy drill in the Strait of Malacca.
STORY HIGHLIGHTS
RELATED TOPICS

(CNN) -- A terrorist group might be planning attacks on oil tankers in the Strait of Malacca, one of the world's busiest shipping lanes, Singapore's navy warned Thursday.

"The terrorists' intent is probably to achieve widespread publicity and showcase that it remains a viable group," said an advisory issued by the Singapore Navy Information Fusion Centre (IFC).

"However, this information does not preclude possible attacks on other large vessels with dangerous cargo," the advisory said.

It did not name any groups or indicate how the tip was obtained.

Located between Indonesia, Malaysia and Singapore, the Strait of Malacca links the Indian Ocean to the South China Sea and Pacific Ocean and is the shortest sea route between Persian Gulf oil suppliers and Asian markets, according to the U.S. government's Energy Information Administration.

The agency estimates that more than 15 million barrels of oil are transported through the strait every day.

At its narrowest point, the strait is only 1.7 miles wide, which creates a natural bottleneck and makes it vulnerable to terrorist attack.

The IFC warned tanker crews to be on the lookout for smaller vehicles -- including dinghies, sampans and speedboats -- which have been used to launch successful attacks on tankers in the past.