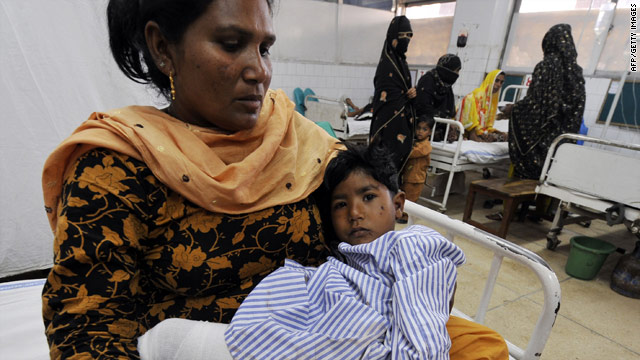 A Pakistani woman holds a boy who was injured in suicide bombings in Lahore on Friday.
STORY HIGHLIGHTS

Islamabad, Pakistan (CNN) -- The Pakistan Taliban claimed responsibility for a suicide bombing that killed at least 13 people and injured dozens in the northwest part of the country Saturday, authorities said.

The attack at a security checkpoint in the city of Saidu Sharif injured 37, according to Ibrahim Khan, a police official in the Swat District, where the military launched an offensive against the Taliban last year. The city is near Mingora, the largest city in the district.

Khan said the suicide attacker, who was dropped off on a rickshaw, approached a checkpoint manned by police and military personnel.

Azam Tariq, a spokesman for the Tehrik-e-Taliban Pakistan, told CNN by phone that his organization takes responsibility for the deadly blasts in Lahore on Friday and the attack Saturday.

The Saturday blast comes a day after a twin suicide bombing on a military convoy in Lahore killed 44 people and injured nearly 100 others. Assailants targeted military convoys, approaching on foot and detonating their explosives 15 to 20 seconds apart, Punjab Law Minister Rana Sana Ullah said. Five of the dead were Pakistani soldiers, he said.

"Pakistan has become a colony of Blackwater," Tariq said, referring to the company now known as Xe Services that provided security to U.S. officials in Iraq.

"The government of Pakistan has become puppet of U.S," he added.

Tariq warned that failure to halt operations against the Taliban will lead to more attacks.

"Our 2,000 suicide bombers, who have already spread across the country, will act against security personnel and government installations," Tariq said.

Tariq said the attacks on both days were a retaliation for the killing of innocent "Mujahedeen" by Pakistani government under the orders of the United States. A Pakistani crackdown on militants has resulted in the arrests of top Taliban.

After the twin bombings Friday, a series of low-level blasts occurred in succession in the Iqbal Town area of the city that night. Three people were injured in the blasts and damage was minimal, Lahore Police said.

Earlier this week, gunmen entered a North West Frontier Province compound of the humanitarian agency World Vision, threw grenades, opened fire on the staff inside and detonated a homemade bomb before leaving, according to a World Vision statement.