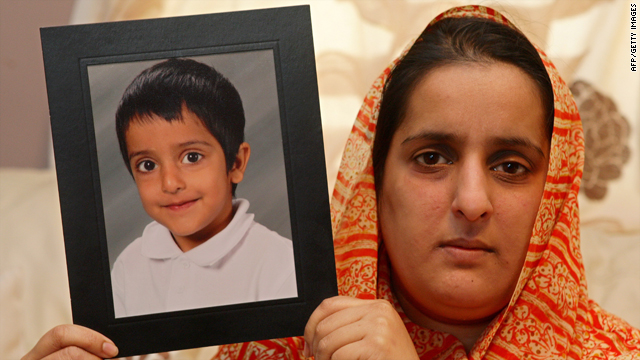 (CNN) -- A five-year-old British boy who was kidnapped in Pakistan earlier this month has been found safe and is back with his relatives, the British High Commission said Tuesday.

Sahil Saeed was released at a school in the Punjab province of Pakistan, said Assistant Chief Constable David Thompson of the Greater Manchester Police in England, near his parents' residence in Oldham.

From there, Sahil wandered into a field and was found by residents who looked after him until police arrived, Thompson said.

Regional Pakistani police said Sahil was found near the town of Danga in Punjab province, close to where he was abducted March 3.

Sahil was in good condition, said Aslam Tareen, the head of the regional police.

"He is with members of family in Pakistan and the Pakistani police, and there is also contact from the British High Commission," Thompson said. He added that Sahil had already spoken to his mother and father in England by telephone and that both parents were "clearly relieved" to speak to their son.

The High Commission issued a statement thanking police in Jhelum, another town in the eastern province of Punjab, for the boy's return.

"This is fantastic news that brings to an end a traumatic ordeal faced by Sahil and his family," said Adam Thomson, the British high commissioner to Pakistan.

Police arrested some of the kidnappers, said Rana Sanaullah, the provincial law minister.

Sahil, a British citizen of Pakistani descent, was on the last day of a two-week vacation in Pakistan before he was to return home to Oldham, in northern England.

Gunmen barged into Sahil's grandmother's home in Jhelum and took him. They reportedly demanded a ransom of 10 million rupees ($118,000).

Pakistan's Interior Minister Rehman Malik had said the captors included someone close to the family.

"There is someone who is very close to the family because the way the situation happened, the way the entry was made," Malik told reporters.

But Tareen said Tuesday there is no evidence that any family member was involved. There was also no indication a ransom was paid, Tareen said.

Sanaullah, the law minister, said the kidnappers were part of a ring that operated in and out of Pakistan. He did not elaborate.

Thompson, of the Greater Manchester Police, could not comment on the possibility of arrests in England.

"At this stage there are no inquiries that we're carrying out in the UK that would lead me to contemplate that we'd make an arrest in the near future," he said.