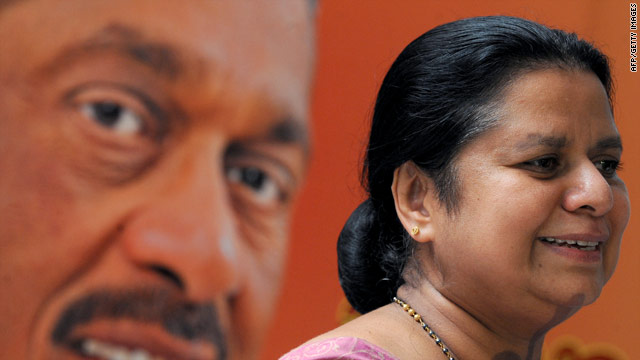 Colombo, Sri Lanka (CNN) -- Sri Lanka's former army chief appeared before a military court Tuesday, on charges that he says are designed to remove him from politics.

Retired Army Gen. Sarath Fonseka faced a panel of three military judges, who are to decide whether he is guilty of participating in politics while still in uniform.

Fonseka's spokesman Anura Kumara Dissanayake said the former military commander's lawyers raised two objections: that the judges are biased and that a military court can no longer rule on Fonseka's case, because he left the army more than six months ago.

The court will reconvene on April 6 to rule on the objections, according to government spokesman Maj. Gen. Prasad Samarasinghe.

However, Fonseka must return to court Wednesday to face separate charges of violating military procurement procedures.

Fonseka says the charges against him are false and politically motivated.

The man credited with the military campaign that defeated a quarter-century-long insurgency by the Tamil Tiger rebel movement was arrested last month. He was dragged from his office by armed military police during a meeting with his supporters, they said.

He has since been detained at naval headquarters in Colombo, where the military tribunal is convening.

Fonseka and President Mahinda Rajapaksa were allies and heroes of last year's battle against the Tigers, but they drifted apart.

Fonseka's supporters say the former general was seen as a threat to the government and his arrest was ordered to prevent his participation in parliamentary elections April 8.

The former military commander challenged Rajapaksa in January's presidential elections, but lost by a wide margin and accused the government of election fraud.

The Fonseka family has challenged his arrest in Sri Lanka's supreme court. Those arguments are to be heard April 26.

His wife, Anoma Fonseka, called the legal proceedings against her husband a joke.