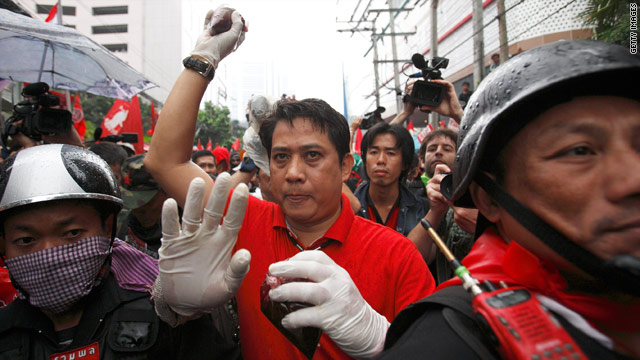 A protester holds blood in a plastic bag to be thrown during a protest near Thailand PM's Abhisit Vejjajiva's residence.
STORY HIGHLIGHTS

Abhisit, who is staying at the army's 11th Infantry headquarters, was out of the capital, visiting drought-hit areas of Thailand at the time of the attack.

Authorities had planted about 1,500 police officers outside Abhisit's residence. The protesters nonetheless penetrated the barricades and flung bags of blood over the walls of the compound.

There were no immediate reports of violence.

A day earlier, demonstrators poured a small amount of blood at government headquarters in Bangkok.

Cleaning up the red mess

The "red shirts" -- so named for their clothing -- are collecting 1,000 liters of their own blood every day to splatter on various official buildings.

The gesture is the latest move by the anti-government United Front for Democracy Against Dictatorship, or UDD, to force Abhisit to dissolve parliament and call new elections.

Abhisit repeatedly has said that he will listen to the protesters, but will not accede to their demands.

The rallies have been largely peaceful. Abhisit has said his government will not use force to quell the protests.