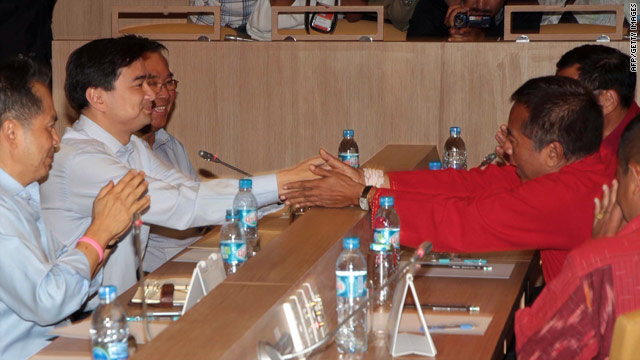 Bangkok, Thailand (CNN) -- Thai Prime Minister Abhisit Vejjajiva met with the leaders of an anti-government movement Sunday in a highly anticipated meeting that ultimately did not produce an agreement.

The opposition is demanding that the prime minister dissolve the parliament.

It was unusual for the leader of a state to sit at the same table with demonstrators. Abhisit finally agreed to the talks after the protesters pulled back their crowd and regrouped to their main gathering place.

The "red shirts" -- named for their clothing -- have gathered by the thousands in central Bangkok and have said they will not leave until Abhisit calls fresh elections.

"If you don't, we will just go back to the street and continue our demonstration," he said.

The prime minister said he is open to the dissolution, but asked if "dissolving the parliament can actually solve the root cause of the problem. Shall we use this remaining time of this administration to find the rules of game that can be accepted for all parties."

"[The] polarization problem [in Thailand] has deepened too far to be just solved by dissolving the parliament," Abhisit said at the meeting, which was televised.

The protesters have given an ultimatum for the government to dissolve the parliament within two weeks. The opposition wants an answer by Monday.

Although no agreement was reached at the meeting, Abhisit said he was glad the meeting took place and is ready for future meetings.

A second meeting is already scheduled for Monday.

The protesters -- who are members of United Front for Democracy Against Dictatorship, or UDD -- had given the government until 1 p.m. Sunday to set up a time and place for the meeting, said party leader Weng Tokirakarn. The group demanded that Abhisit himself sit at the negotiating table and not send a representative.

But shortly before the announcement, hundreds of protesters moved away from outside the Army's 11th Infantry Regiment headquarters -- where Abhisit has been staying and where they had camped out.

He fled the country in 2008 while facing trial on corruption charges that he said were politically motivated.