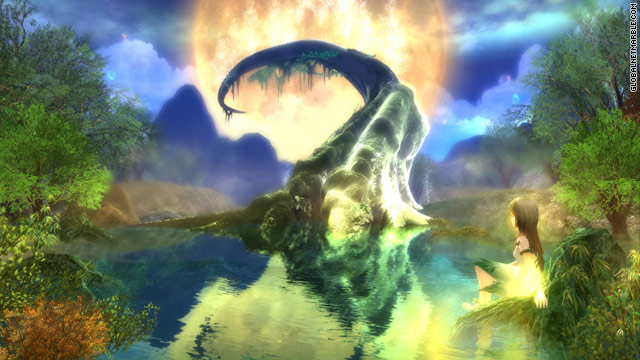 Suwon, South Korea (CNN) -- A South Korean couple whose three-month-old daughter died of malnutrition while they were raising a virtual child in an online game pleaded guilty to negligent homicide on Friday.

Prosecutors are seeking a five-year sentence for the couple, whose defense included a statement alleging gaming addiction.

The pair is expecting a second child in August. Their first daughter's name, Kim Sa-rang, means "love" in Korean. She died in September of malnutrition while they were engaged in overnight sessions at a PC Bang, or a 24-hour Internet cafe. The couple would allegedly put her to bed and leave for 10-hour gaming sessions.

They were playing Prius Online, a 3-D fantasy game in which players raise an online girl who gains magic powers as she is nurtured and grows older.

Video: Virtual obsession leads to baby's death
I will be guilty until the day I die
--Kim Jae-beom, father
RELATED TOPICS

"I think of our baby in heaven," the father responded when asked if he had anything to say. "I will be guilty until the day I die."

The father -- a slight, gray-haired man and the mother -- a visibly emotional woman -- were dressed in pale green detention center uniforms. They appeared nervous and timid; neither had previous convictions. The father was a taxi and truck driver, while the mother was unemployed.

They said they met in 2008 and the father introduced Kim to online gaming. Sa-rang was born prematurely in July last year and died a few months later. At the time of death, she weighed 5.5 pounds (2.5 kgs), the court heard. She was 6.4 pounds when she was born.

"When she cried, I cuddled her, but I noticed she was getting thinner," the mother said, adding that she had not learned about baby care at the hospital nor had she read any books on the subject.

The couple reported the baby's death to police, who become suspicious about her low weight. They were subsequently arrested and investigated.

"They were addicted to Internet gaming; they put their baby to sleep and came home early in the morning," said their attorney, Kim Dong-young (no relation) of the Korean Legal Aid Corp. "They regret it, but Ms. Kim is pregnant, please consider this."

Speaking about his unborn child, the father said: "There will be no second mistake."

Korea has arguably the world's most advanced broadband infrastructure, a $5 billion gaming industry and an evolving culture built around gaming. Companies such as Samsung sponsor pro-teams that compete in leagues.

Given the wide availability of the Internet -- there are 21,500 PC Bangs nationwide -- Web addiction has been widely noted in South Korea, though questions remain on the most appropriate treatment.

How is South Korea trying to beat Internet addiction?

The case could set an important legal precedent if it establishes that gaming addiction is a mitigating circumstance in crime.

Korean law accepts drunkenness as such on the basis that the perpetrator is not acting according to his own will. With neither defendant having psychological problems beyond game addiction, the judge may set a precedent.

"Since they were addicted, the judge could make it a factor in cutting their sentence," the lawyer said.

Even if he does, Korea is not a litigious society, the lawyer said, and the chances of businesses such as PC Bangs or game developers being sued are low.

The case has sparked interest in the gaming industry.

"I have been reading the articles," said an employee of "Tony's," a PC Bang in Suwon, near the court. But, he said, the case would not have any ramifications for the industry.

The trial lasted just over half an hour in a near-empty courtroom in Suwon, a satellite city an hour south of Seoul best known as home to the factories of Samsung, a leading electronics company.