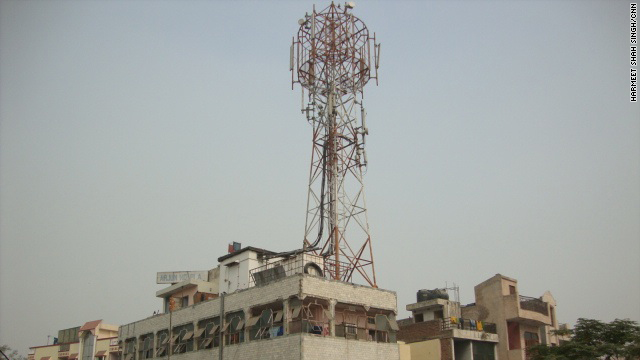 Cell phone operators have been ordered to move towers out of residential areas or get written statements from residents saying they don't mind having them installed in their neighborhoods.
STORY HIGHLIGHTS
RELATED TOPICS

Authorities told cell phone operators to move the towers out of residential areas or get written statements from residents saying they don't mind having them installed in their neighborhoods, he said.

"The drive will continue against those who do not comply. Non-complying towers will either be sealed or dismantled," Sen said.

So far, municipal officials have sealed about 350 such towers, said Deep Mathur, spokesman for the Municipal Corporation of Delhi. Authorities have given cell-phone operators a two-week reprieve to obtain official permission for towers installed illegally, he said Wednesday.

Authorities have vowed strict enforcement of rules banning such antennas atop hospitals and on school compounds.

In New Delhi, the distinction between commercial and residential areas is fine. Landlords often use their residential properties for business, allowing cell phone operators to pay rent on the space that the towers occupy.

"The towers put up by mobile phone operators do not affect the health of the people in nearby areas," he said.

India, he said, had adopted guidelines by the International Commission on Non-Ionizing Radiation Protection on basic restrictions on electromagnetic-field exposures.

New Delhi is home to about 16 million cell phone users, according to the Cellular Operators Association of India (COAI) director-general T.R. Dua.

He said no operator in Delhi had received government notices about the towers and that requests for official permissions to install the antennas had often suffered bureaucratic delays.

He warned that the current drive could impact services; it was not known whether the shutting down of the illegal towers had affected the city's cellular network.

India's telecommunication sector has grown rapidly over the past decade. At present, the country has more than 500 million mobile phone users, according to data.

During the economic slowdown of 2007 and 2008, India's telecom market added 12 million subscribers every month, officials say.