Rescuers enter flooded mine in China 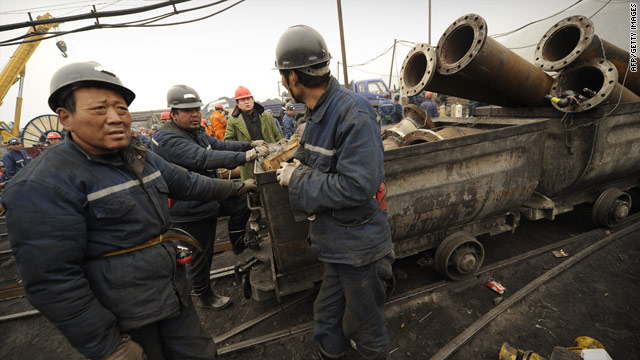 Mine workers prepare to send equipment into the Wangjialing coal mine where 153 workers are trapped, March 31, 2010.
STORY HIGHLIGHTS
RELATED TOPICS

(CNN) -- Rescue teams entered a flooded mine in northern China on Saturday to help 153 workers trapped for almost a week, state-run media reported.

At least 13 rescuers, including six divers, had entered the mine in Shanxi Province, Xinhua news agency said.

The crews had boats and floatation devices, and underwater cameras to film the shaft environment, Xinhua said.

A total of 283 rescuers are taking part in the rescue effort, and ambulances for each trapped miner were at the scene. Nearly 156 medical officials were also ready to provide immediate treatment to the trapped miners, the news agency said.

The rescue effort comes a day after crews heard sounds that included trapped miners knocking on a metal pipe, according to Xinhua.

After rescuers at the Wangjialing mine heard the noise, they knocked on a pipe in response and shouted, and the trapped miners shouted back.

The level of water in the mine had dropped by 5.3 meters since it flooded Sunday, officials said.

Wangjialing mine flooded Sunday when underground water rushed into the pit, which was under construction, according to Xinhua.

At least 261 miners were working at the time, 108 of whom were rescued. A wire was used to pump out water and send down food, Xinhua said.

If the workers cannot be saved, the accident will be China's worst mining disaster since 2007, Xinhua said.