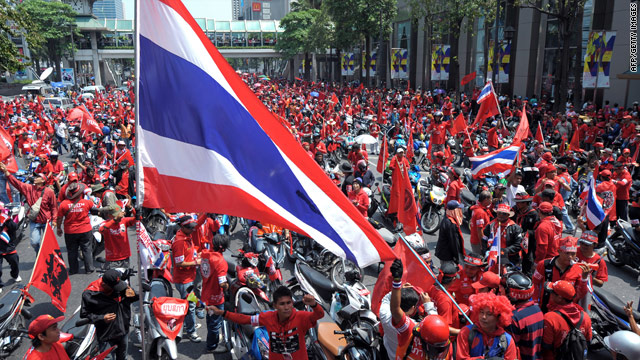 Bangkok, Thailand (CNN) -- Thousands of anti-government protesters defied an order Sunday to disperse from the capital's commercial center, but the government said it would use negotiation -- not force -- to get them to comply.

Police estimated that as many as 50,000 members of the group United Front for Democracy Against Dictatorship were at the Rajprasong intersection in the heart of Bangkok.

They forced the closure of luxury shopping malls, blocked entrances to five-star hotels and made access to a holy shrine difficult.

A spokesman for the government's peacekeeping operations, Col. Sansern Kaewkamnerd, said that the protesters had "incited and created a situation which has caused great inconvenience to the conduct of business and the pursuit of normal activity."

He said that the gathering was not considered to be a "peaceful demonstration sanctioned by the constitution."

The government's Center for Administration of Peace and Order (CAPO) announced a clause to the country's Internal Security Act on Saturday night that makes unlawful gatherings punishable by up to a year in prison and a fine.

Prime Minister Abhisit Vejjajiva took to the airwaves Sunday, urging people in the affected area to be patient.

He said his administration is negotiating with the protesters to peacefully disperse and that the government did not intend to use force.

The opposition group, also known as the "red shirts," is demanding that the prime minister dissolve the parliament within 15 days. Abhisit has said that doing so would not solve the country's political crisis.

The two sides met for meetings on March 28 and 29, but they ended in a stalemate.

The demonstrators are supporters of former Prime Minister Thaksin Shinawatra, who was ousted in a bloodless military coup in 2006. Thaksin was the only Thai prime minister to serve a full term and remains hugely popular.

He fled the country in 2008 while facing trial on corruption charges that he says were politically motivated. The protesters say Abhisit was not democratically elected and have demanded that he call elections.