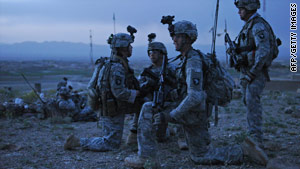 Kabul, Afghanistan (CNN) -- Conflicting accounts of a botched NATO raid that killed five Afghans in February have led to a new investigation ordered by the top U.S. commander in Afghanistan, a NATO military spokesman said Monday.

Lt. Col. Todd Breasseale, a NATO spokesman, said Gen. Stanley McChrystal, who oversees all U.S. and NATO troops in Afghanistan, called for the review after receiving a briefing from Afghan officials in late March.

On Sunday, NATO acknowledged that its troops killed five Afghans in the nighttime raid in February, after initially saying the civilians may have been the victims of an "honor killing."

Although civilian casualties at the hands of NATO troops have fallen off in recent months, such incidents have strained the relationship between Afghanistan and the Western nations that make up the International Security Assistance Force.

According to two U.S. military officials, in the March briefing, Afghan officials from the Interior Ministry told McChrystal that after the incident, they visited the compound where the Afghans were killed and found evidence of bloodstained walls being washed down and bullets being dug out.

McChrystal wants a thorough review now to see why U.S. and Afghan accounts differ so greatly, according to one of the sources, a senior U.S. official familiar with the briefing.

The senior U.S. official said that by the time the Afghan investigators got to the compound, the people who lived there may have been attempting to clean it up. NATO officials believe the U.S. and Afghan troops may have dug some bullets out of the wall for purposes of the initial investigation, which is a common practice, the official said.

In March, the International Security Assistance Force released a statement denying a report by a British newspaper that NATO had covered up the involvement of troops in the incident.

U.S. officials continue to deny that there was any coverup of U.S. involvement. "We have no evidence to date anything improper was done," the senior U.S. official said.

At the time of the February 12 incident, NATO said its troops went to a compound in the village of Khatabeh in Paktia province, believing it to be a militant hideout. A firefight ensued, and several insurgents died, NATO said at the time.

When soldiers entered the compound, they found the bodies of two men and two women who had been shot "execution-style," a senior U.S. military official said then.

"It has the earmarks of a traditional honor killing," the official said, adding that the women were found bound and gagged.

An honor killing is a slaying carried out by a family or community member against someone thought to have brought dishonor to them.

The senior U.S. military official said that at the time, it wasn't clear whether dishonor in the case stemmed from accusations of acts such as adultery or even cooperation with NATO forces.

But on Sunday, NATO made an about-face from its earlier claims.

"International forces were responsible for the deaths of three women who were in the same compound where two men were killed by the joint Afghan-international patrol searching for a Taliban insurgent," NATO said in a statement. There was no explanation given for the cause of the third woman's death or why it wasn't mentioned previously.

The two armed men whom troops killed were not insurgents, NATO said Sunday.

"The force went to the compound based on reliable information in search of a Taliban insurgent and believed that the two men posed a threat to their personal safety," the NATO statement said. "We now understand that the men killed were only trying to protect their families."

NATO said a lack of forensic evidence made it difficult to determine how or when the three women died. But it concluded that they were killed when troops fired at the men.

As for the initial report about the women being found bound and gagged, the NATO statement said it stemmed from a cultural misunderstanding.

"The statement noted the women had been bound and gagged, but this information was taken from an initial report by the international members of the joint force who were not familiar with Islamic burial customs," the statement said, without elaborating.

NATO troops who went to the scene after the raid may have misinterpreted burial rites. Muslims wrap their dead in clean white cloth before they are placed in the ground.

NATO said it will apologize to the victims' family members and offer compensation in accordance with local customs.

The NATO admission follows the fatal shooting of five Afghan soldiers by troops in a friendly fire incident in northern Afghanistan on Friday. Afghan President Hamid Karzai has strongly criticized civilian deaths by international troops, and the deaths have bred resentment among many Afghans.

The numbers have fallen off in recent months since McChrystal took over as U.S. commander in Afghanistan.

"It is better to miss a target than to cause civilian casualties," McChrystal said in December. "We can always target enemy leaders later. We can't make up for the fact that we killed civilians."