Protesters gather in Bangkok as officials warn of economic cost 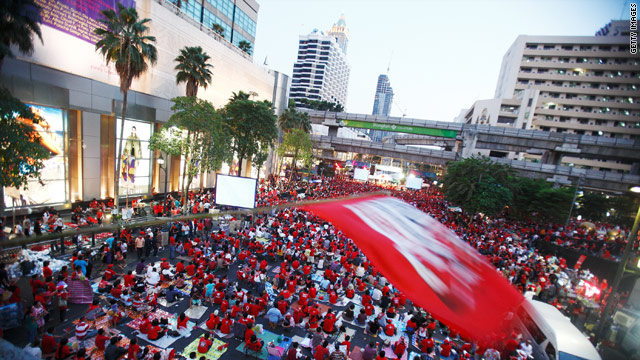 Anti-government protesters clog the streets of a busy shopping district forcing the closure of the malls on April 5, 2010.
STORY HIGHLIGHTS
RELATED TOPICS

Bangkok, Thailand (CNN) -- Thousands of anti-government protesters defied calls to disperse and flocked to Bangkok Tuesday, jamming the commercial hub of the city for the fourth straight day as officials predicted a blow to the economy.

The group, United Front for Democracy Against Dictatorship, forced the closure of luxury shopping malls, blocked entrances to some hotels and made access to a holy shrine difficult.

"It's kind of affecting my traveling plan because most shopping malls are closed," said Jessie Lim, a tourist. "But we are still staying, continue to stay until the day we go back."

The government's Center for Administration of Peace and Order said it will enforce the law.

Rajprasong and Phan Fa bridge were the two main gathering points, authorities said. They estimated a crowd of about 15,000 at both places, and declared the gathering unlawful.

Watch the protests firsthand, or submit your own account if you're there

Military and officers are not armed, and demonstrators can leave safely, a police spokesman said.

But some tourists remained concerned.

"The only thing that I'm quite possibly afraid of would be if it got out of control and the government decided to send in riot troops," Steven Finn said. "But it seems to be pretty much peaceful, it doesn't seem to be any violence occurring at this present time."

Natthawut Saikua, co-leader of the group also known as red shirts, announced a change of plans and called for the cancellation of rallies in 11 banned streets. A small group of red shirt members defied the change and went through the streets.

A committee of banking and chamber of commerce officials joined the plea for the anti-government group to disperse. They estimated the financial loss from the rallies to be between $6 million to $10 million a day for the first three days. The cost would increase as the days progressed, the committee said.

If the protests continue, they could affect tourism by about 10 percent a day, said Chumpol Silapaarcha, the nation's tourism minister.

Prime Minister Abhisit Vejjajiva took to the airwaves Sunday, urging people in the affected area to be patient. He said his administration is negotiating with the protesters to peacefully disperse and that the government did not intend to use force. The opposition group is demanding that the prime minister dissolve the parliament within 15 days.

Abhisit has said that doing so would not solve the country's political crisis. Both sides met on March 28 and 29, but they ended in a stalemate.

The demonstrators are supporters of former Prime Minister Thaksin Shinawatra, who was ousted in a bloodless military coup in 2006. Thaksin remains hugely popular. He fled the country in 2008 while facing trial on corruption charges that he says were politically motivated.