China: Death toll in flooded mine now at 12 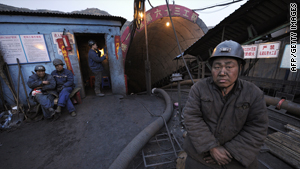 The 26 are among the last group of miners who remain trapped in the mine.
STORY HIGHLIGHTS

Beijing, China (CNN) -- The death toll in a flooded mine in northern China has risen to 12, and crews were working to rescue 26 miners who remain trapped, state media reported on Thursday.

Chinese state TV quoted rescue officials as saying water levels remain high in the two areas where the remaining miners are believed to be trapped, and rescue workers were working to pump out water and mud.

The 26 are among the last group of miners who remain trapped more than a week after a rush of underground water flooded the Wangjialing mine in Shanxi province on March 28.

A total of 261 miners were inside when the mine flooded after workers broke into an unused shaft that had filled with groundwater.

Rescuers were able to reach 108 miners immediately after the flooding, and on Monday, 115 miners were pulled out alive amid cheers.

Of those workers saved, 29 of them are in severe condition, suffering from kidney damage, gastritis, lung and heart problems and skin diseases. Others are recovering quickly.