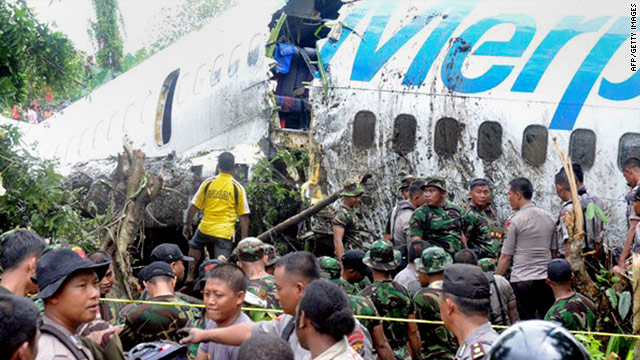 Soldiers and police examine a Merpati Airline 737 after it skidded off the runway on landing in Manokwari, Indonesia, Tuesday.
STORY HIGHLIGHTS
RELATED TOPICS

Jakarta, Indonesia (CNN) -- A passenger plane crashed into a shallow waterway and broke in two after overshooting the runway in a remote area of Indonesia's eastern Papua province on Tuesday, injuring 78 people on board.

Bambang Ervan, a spokesman for Indonesia's Transportation Ministry, said investigators to the airport in the coastal town of Manokwari where the Merpati Nusantara Airlines Boeing 737-300 had been attempting to land.

There were reports that bad weather may have been a factor.

The injured, many of whom suffered fractures, were taken to hospitals in the area. In all, the plane was carrying 103 passengers, including three children and three infants.

Ervan said the aircraft bounced on the runway during landing, skidded and plunged into a nearby canal.

Merpati, a cash-strapped state-owned airline which is in the process of upgrading its aging fleet, flies many of the more remote routes across Indonesia.

Last year Merpati suffered two plane crashes in Papua. In July, a Merpati flight lost its front wheels as it took of from the town of Biak. A month later, another flight -- a Twin Otter aircraft -- crashed, killing 16 people on board.

Air accidents are not infrequent in Papua, a mountainous area in the easternmost part of Indonesia. Two cargo planes and several smaller aircraft also crashed in the province last year.

Indonesia has made efforts in recent years to improve its safety record. Last year the European Union's Safety Commission lifted a ban on four Indonesian carriers.

In Hong Kong, Tuesday, a Cathy Pacific flight from Surabaya in Indonesia made an emergency landing injuring eight people.

Passengers and crew deplaned through the Airbus 330's evacuation slides. The injured were taken to the territory's Princess Margaret Hospital.

Tyler said a full investigation will follow but engine trouble may have played a part in the incident.

The north runway at the Hong Kong International Airport was closed for almost three hours after the emergency landing.