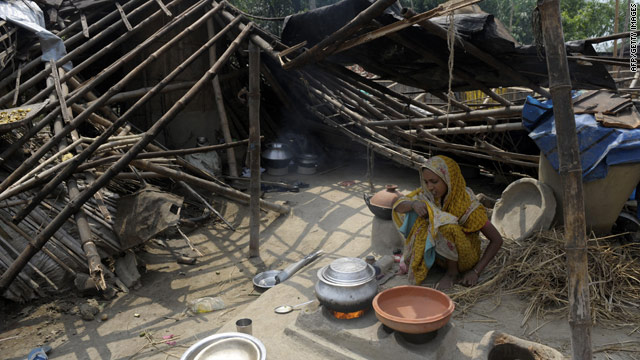 An Indian woman cooks beside her collapsed hut in the West Bengal village of Karandighi on Thursday following a storm.
STORY HIGHLIGHTS
RELATED TOPICS

About 300,000 homes were damaged in the storm that cut a deadly path through parts of India's West Bengal and Bihar states early Wednesday, officials said.

The 45-minute storm packed winds of up to 120 kph (75 mph), knocking down communication links in North Dinajpur. The West Bengal district stretches along a 227-kilometer (141-mile) border with Bangladesh to the east and is home to 2.5 million people.

District official P.K. Dutta said 41 people died and 200,000 homes were damaged, many of them flattened, in the largely rural area.

At least 81 more people were killed in the same storm in neighboring Bihar, said the state's disaster-management official Vyasji, who uses one name.

About 100,000 homes were affected in Bihar, India's poorest state.

Relief efforts are under way.