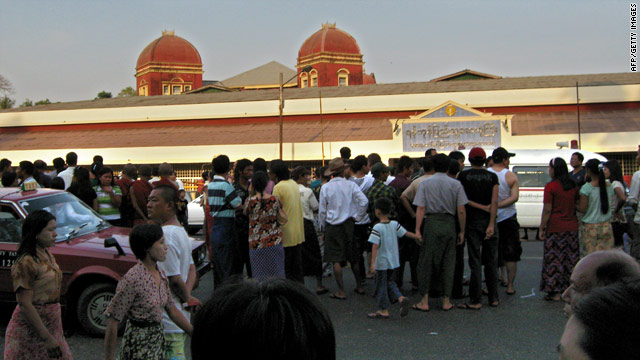 People wait Thursday for word of relatives outside the emergency department of Yangon Hospital in Myanmar.
STORY HIGHLIGHTS
RELATED TOPICS

Yangon, Myanmar (CNN) -- The government of Myanmar said three bombs caused the deadly blasts that ripped through Yangon on Thursday, an action it calls a terrorist attack.

The blasts occurred at 3 p.m. local time during a water festival, part of the New Year's celebration taking place in Myanmar and other southeastern Asian countries. People toss water on each other as part of a cleansing ritual during the celebration.

Myanmar, formerly called Burma, is under strict military rule and such blasts are rare. Yangon, Myanmar's former capital and the country's commercial hub, is generally a crime-free and calm city.