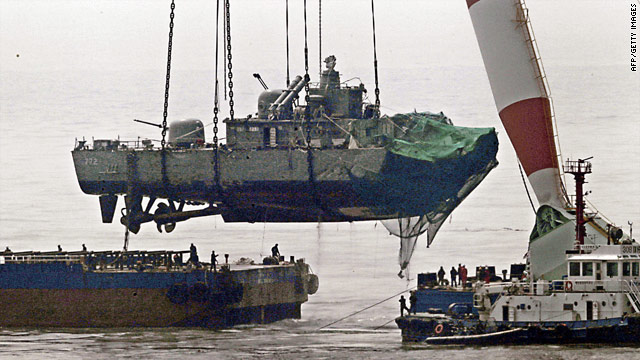 A giant floating crane lifts the stern of the South Korean warship onto a barge.
STORY HIGHLIGHTS

Seoul, South Korea (CNN) -- A South Korean investigator said Friday that an "external explosion" was the most likely cause of the mysterious sinking of a naval ship in which 46 South Korean sailors were lost in tense waters off the North Korean coast.

"There is a higher possibility of an external rather than an internal explosion," Yoon Duk-yong, the co-head of a government-appointed team to investigate the March 26 sinking of the corvette Cheonan, said Friday in a televised press conference.

The Cheonan's stern section, where the missing sailors were believed to have been trapped, was raised from the Yellow Sea bottom Thursday after a salvage operation that was made both risky and difficult by low underwater visibility and strong currents. The bow section is expected to be salvaged next week.

Of the Cheonan's 104-man crew, 58 men were rescued from the sea on the night of the explosion. Thirty-eight bodies have so far been recovered; eight remain missing.

Yoon's comment was based on a preliminary investigation of the stern wreckage. He added, however, that it was necessary "to make a detailed analysis, leaving all possibilities open."

While Seoul has avoided blaming North Korea, Kim has said that a sea mine or torpedo appear the most likely causes. The media has been rife with speculation -- theories aired range from an internal boiler explosion to a North Korean naval special forces attack.

On Thursday, Open Radio for North Korea, a Seoul-based radio station that maintains covert contacts north of the border, announced that Northern authorities are calling the Cheonan sinking "self-inflicted."

North Korea's state-run media have been silent on the issue, and both South Korean and U.S. forces in South Korea say they have not detected any unusual moves by the armed forces of the hard-line state.

However, the Cheonan went down close to the disputed inter-Korean sea border, off which fatal naval skirmishes took place in 1999 and 2002.

If forensic evidence does point to North Korean involvement, it is unclear what moves South Korea could take against a country that has artillery ranged in on Seoul, and which is believed to possess at least six nuclear devices..

The United States declined to strike militarily against North Korea when the spyship USS Pueblo was seized in international waters off North Korea in 1968.

Nor did South Korea retaliate in 2002, when three Southern sailors were killed and their patrol boat sunk in a North Korean attack on the same day that South Korea was playing its last match of the World Cup.