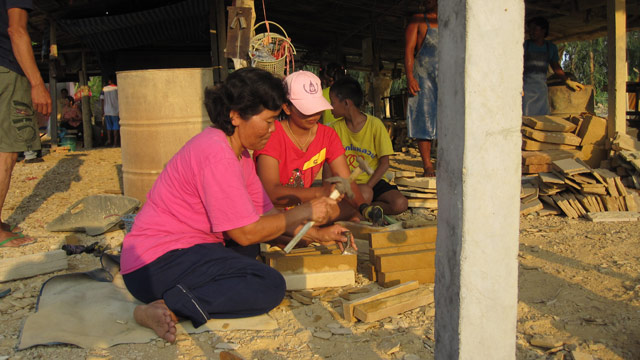 It's mesmerizing to watch her hands expertly chip away, not missing a beat. She works from sunrise to sunset, ignoring the pain in her back, focusing all her energy on making sure each blow is accurate.

The majority of those out here cut stone when it is not farming season -- part of a never ending battle to survive.

This is Red Shirt heartland, some seven hours away from the bustle and high rises of Bangkok, home to the majority of the nations rural poor. Homes are simple structures, roads in villages tend not to be paved, and children dart around naked, blissfully unaware of the political turmoil that threatens their nation.

Despite the impact on her income, Prayuan says that she had to make the trip to Bangkok to partake in the Red Shirt demonstrations.

It is money that she and the other families here can ill afford to loose. They tell us that they have seen their income from stone cutting dwindle down to a fifth of what it use to be. They point to the fields and the livestock pens and speak about the days when they used to be filled with cattle.

Just about everyone we met had joined the Red Shirt demonstrations in Bangkok, some riding for hours on a flatbed pulled by a tractor just to get there.

They long for the days of Thaksin Shinawatra, Thailand's former prime minister, who was ousted in a bloodless coup in 2006.

Out here Thaksin is seen as a hero, the man who gave them a voice, fought for their rights and eased their economic burdens.

We ask a group of villagers gathered under the shade of coconut trees exactly what it is they want to see change, and they churn out a chorus of requests.

Better education, health care, economy, opportunity, respect are among the few. People say they feel that current Prime Minister Abhisit Vejjajiva's government has drained them of the meager resources they have.

They view Abhisit's government as illegitimate, and are calling for him to step down and for new elections.

San Saengduan, who just returned from Bangkok to spend the Thai new year with her family says that Thaksin's government helped clear her debt by suspending her loans. Now she says she owes more than before and is making 50 percent less from her farm.

Right or wrongly, she and all the others blame the government for their financial demise.

She says that after her family heard about the clashes between police and demonstrators that claimed the lives of nearly two-dozen people, her mother called, begging her to come home. She says she refused.

"I have to help my people win," she states simply.

San and her husband have been taking turns, one of them working the farm, the other joining the demonstrations.

She says she is worried about the financial loss, but that it's a risk she is willing to take to fight for long-term change.