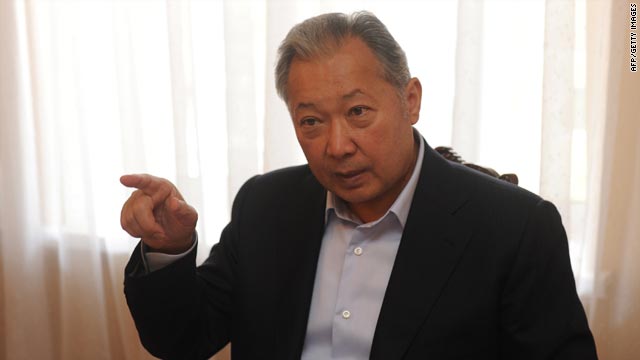 (CNN) -- Kyrgyzstan's interim government has said it will demand the extradition of the country's ousted president from Belarus once the investigation into the bloody massacre of April 7 is completed.

"The Kyrgyz people will never know rest until the bloody dictator is brought to justice," the chief of staff of Kyrgyzstan's new government Edil Baisalov said.

More than 80 people were killed and hundreds were wounded when Bakiev's government ordered troops to shoot at opposition demonstrators gathered outside his presidential office in the country's capital, Bishkek.

Bakiev was overthrown after the clashes and an interim government made up of opposition politicians took power. Days later, Bakiev traveled to neighboring Kazakhstan.

Bakiev and his family were in the Belarus capital of Minsk as of Monday night, Belarus President Alexander Lukashenko said, according to the country's state-run news agency.

Lukashenko, who made the announcement about Bakiev's stay to the country's parliament after his state of the nation address in Minsk, had been saying he planned to give asylum to the ousted Kyrgyz president.

"Bakiev and his family consisting of four people" arrived in Belarus "under the protection of our state as well as its president," Lukashenko said, according to the Belta news agency. "We will not allow anybody to offend them."

Lukashenko said Bakiev is the "president of a friendly country, and I will do everything I can to protect him and his family."

"If he wants to get involved in politics -- that's fine. If he doesn't, but simply wants to live here -- let him do so. We have plenty of room and work to do. And there are quite a few Kyrgyz people living here already," he said.

The Belta news agency said Bakiev and his family were undergoing a medical check-up.

Speaking to CNN in a phone interview, Baisalov said the country's new authorities would expect Bakiev to return.

"As soon as our own investigation, along with the investigation of an international commission is over, we expect that Bakiev will hand himself over," he said. "We expect that he will stick to his promise that he is prepared to accept the results of such probes and face punishment."

Baisalov said former Soviet Union states such as Kyrgyzstan and Belarus signed an agreement allowing the extradition of criminal suspects from one country to another. He said he hoped Belarus would abide by that international agreement.

"It is of course a right of any nation and its leadership to extend its hospitality to whomever it feels appropriate," Baisalov said. "Moreover, we are actually glad that Kurmanbek Bakiev is in the center of Europe, in a country which has thousands of various ties with Kyrgyzstan. We hope that Belarus will guarantee his security until the day that he will face a trial in his own country."

There was no immediate word from Belarus on whether Bakiev would be extradited.

The United States and Russia, which both maintain airbases in Kyrgyzstan, have reached out to the interim government in Bishkek. Kyrgyzstan's larger, oil- and gas-rich neighbor Kazakhstan is also taking an active role, engaging with the new interim government.

The Organization for Security and Co-operation in Europe, Kazakh President Nursultan Nazarbayev, U.S. President Barack Obama and Russian President Dmitry Medvedev and others worked for Bakiev's departure from Kyrgyzstan in order to prevent more tensions there.

"Now the interim government has opportunities for taking effective measures to establish public order and resolve social and economic problems faced by the people of Kyrgyzstan," OSCE Chairperson-in-Office, Kazakhstan's Secretary of State and Foreign Minister Kanat Saudabayev said on Tuesday.

Lukashenko also instructed his country's Foreign Ministry to give humanitarian aid to Kyrgyzstan, which remains far from stable. Over the weekend, Bakiev's supporters took over an administrative building and television station in the deposed president's ancestral home town of Jalal-Abad.

In an announcement released Monday over his Twitter account, Baisalov said, "All instigators and initiators of disorder will be brought to justice swiftly."