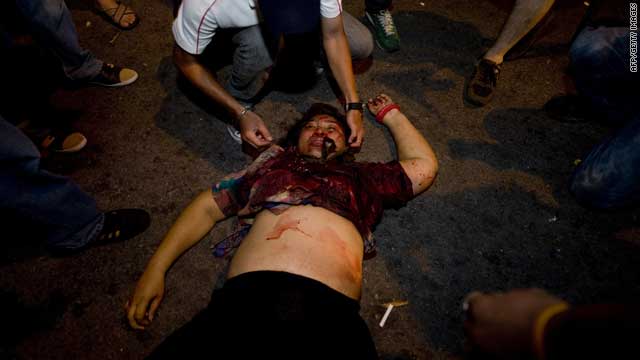 An injured Thai lies on the ground after a blast was heard in the financial district of central Bangkok Thursday.
STORY HIGHLIGHTS

Bangkok, Thailand (CNN) -- Thailand's prime minister huddled with the chiefs of the country's armed forces early Friday after a string of grenade attacks killed at least one person and wounded dozens of others in the already-tense capital.

Prime Minister Abhisit Vejjajiva called an emergency meeting of top officials after the Thursday night attacks, which followed weeks of protests aimed at toppling his administration.

Deputy Prime Minister Suthep Thaugsuban told CNN the grenades were launched from the area where the anti-government protesters, known as the Red Shirts, have been encamped for weeks, but the protesters denied any responsibility for the attacks.

Suthep said riot police and helicopters were deployed to join Thai troops in the area, which was still littered with glass amid the standoff.

Across the barricades, the Red Shirts were playing music and trying to encourage a festive atmosphere.

Demonstrators told CNN late Thursday they wanted to drive home the point that their demonstrations are supposed to be peaceful.

Thursday's explosions took place near an elevated train station where the Red Shirts are gathered, said Col. Sansern Kaewkumnerd, spokesman for the Center for Resolutions under Emergency Situation.

Three of the grenades landed on the roof of the station, but at least one landed outside a nearby hotel, Sansern said.

The emergency center, which records patients admitted to Bangkok hospitals, said the victims suffered wounds ranging from light to some more serious injuries.

Meanwhile, pro-government demonstrators in multicolored shirts have also mobilized to support Abhisit during the crisis.

Thailand's military on Monday stationed about 1,500 troops in the area, a Bangkok financial center that houses offices for some of the nation's largest companies. The Red Shirts are occupying a large area nearby. Clashes between the two sides left about two dozen people dead and hundreds wounded on April 10.

Abhisit declared a state of emergency April 7, hours after anti-government demonstrators stormed the country's parliament. He said then that the "purpose is to restore peace and order and to stop the spreading of false information to the Thai public."

Amid the long-simmering dispute, Thailand's independent election commission recommended the dissolution of Abhisit's Democrat Party after finding it accepted an $8 million campaign donation from a private company and mishandled funds allocated to it by the commission.

The ruling still must be reviewed by the country's attorney general's office and its Constitution Court, but if it stands, the 64-year-old party will be broken up, and Abhisit and its other senior leaders will be banned from politics for five years.

CNN's Kocha Olarn and Arwa Damon contributed to this report.