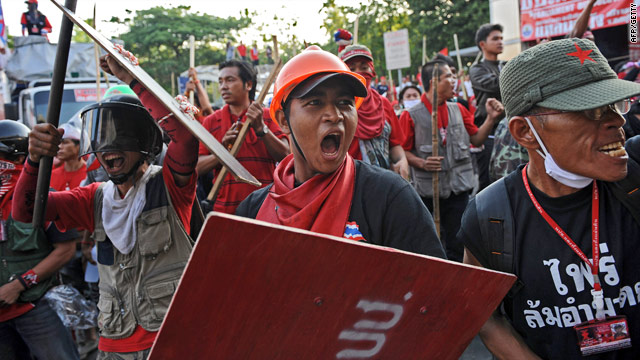 Bangkok, Thailand (CNN) -- The leaders of anti-government protesters in Thailand offered Friday to return to the negotiating table -- but only if the government meets certain demands.

The demonstrators will resume negotiations if the government lifts a state of emergency and other measures and shows responsibility for the deaths of protesters on two days this month, said Weng Tojirakarn, a co-leader of the anti-government Red Shirt protesters.

His remarks come as tension remains high on the streets of Bangkok, where a political standoff has gripped the country for several weeks.

The Red Shirts have been clashing with the Thai military in a Bangkok area that serves as a financial hub.

Another co-leader of the Red Shirts, Veera Muskapong, met with foreign diplomats Friday and told them he might meet with the government if it meets certain conditions.

Prime Minister Abhisit Vejjajiva, meanwhile, huddled with the chiefs of the country's armed forces early Friday after a string of grenade attacks killed at least one person and wounded dozens of others.

The Thai Department of Special Investigation warned that people responsible for the grenade attacks could face the death penalty, the MCOT news agency reported.

The attacks prompted the U.S. State Department to issue a travel alert advising American citizens of the escalating violence in Bangkok.

Suthep said riot police and helicopters were deployed to join Thai troops in the area, which was still littered with glass amid the standoff.

Across the barricades, the Red Shirts were playing music and trying to encourage a festive atmosphere. Demonstrators told CNN late Thursday they wanted to drive home the point that their rallies are supposed to be peaceful.

Thrown into the volatile mix are a group of protesters who called themselves the Multicolored Shirts -- they oppose the anti-government Red Shirts. On Friday, they took to the streets in large numbers.

Thursday's five explosions took place near an elevated train station where the protesters are gathered, said Col. Sansern Kaewkumnerd, spokesman for the Center for Resolutions under Emergency Situation. Three of the grenades landed on the roof of the station, but at least one landed outside a nearby hotel, Sansern said.