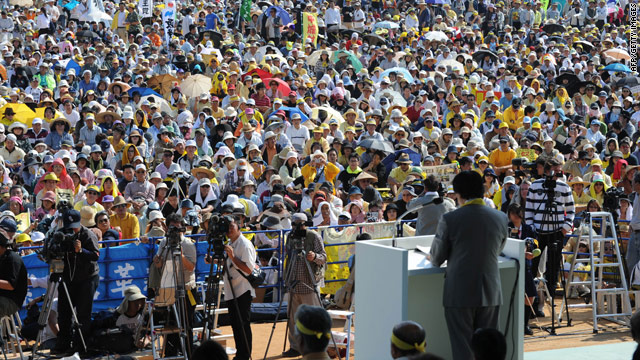 Tokyo, Japan (CNN) -- An ongoing feud with the United States over the future of an American military base in Okinawa may end up costing Japan's prime minister his job, a weekend poll shows.

Two out of three Japanese say they disapprove of Prime Minister Yukio Hatoyama, according to a Nikkei newspaper poll. It shows that 68 percent of voters disapprove of the prime minister's performance and 59 percent say he should resign if he can't resolve the fight over the future of the Futenma Air Base in Okinawa.

The poll comes on the heels of a massive rally in Okinawa, where nearly 100,000 residents gathered Sunday to demand the base move off the island.

In 2006, the United States and Japan agreed to move the base from a city center to a rural part of Okinawa.

But last year, as then-candidate Hatoyama campaigned for the country's top job, he promised to move the base off of Okinawa altogether. The issue is an emotional one for Okinawans who currently give up 10 percent to 20 percent of the island to the U.S. military.

The residents, energized by an anti-U.S. campaign pledge in the last election, voted overwhelmingly for Hatoyama. But as prime minister, Hatoyama has found the promise difficult to keep, prompting residents to demand that he fulfill that pledge.

The U.S., Japan's closest ally, says Japan should live up to the 2006 agreement. Hatoyama has pushed back, saying his government will look at other options. The two governments have established a working group to find an agreeable solution, but in the meantime, it has frayed the normally lockstep relationship between the allies.

In Japan, analysts say the lack of a quick solution to the base issue is dragging down Hatoyama's poll numbers and entire agenda.

"When a politician picks up a populist issue, he has to put it down in a populist manner, to please all the Japanese people," said Keith Henry, principal officer at Asia Strategy in Tokyo.

"Mr. Hatoyama has failed completely as a Japanese politician, as a leader of this country to take control of that issue," Henry said. "What should have been a regional issue within Okinawa has become a national referendum on Hatoyama himself, and unfortunately, on the state of U.S.-Japan relations."

Turning up the heat even more, Okinawans are taking their protest this week to the United States. The Japan-U.S. Citizens for Okinawa Network and the Network for Okinawa have paid for a full page ad to run in The Washington Post this week. The ad reads: "Would you want 30 military bases in your backyard?" and asks: "Tell the Obama Administration: We don't need this base in Okinawa."