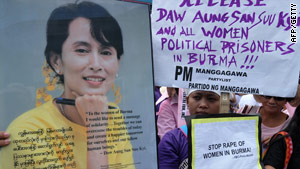 (CNN) -- Myanmar's Prime Minister Thein Sein and several other ministers resigned from their military posts Monday so they can take part in the country's upcoming elections.

The list of resignations comprised of the prime minister, nine other ministers and four deputy ministers, a military official inside Myanmar told CNN.

The country's military junta keeps a tight restriction on information, and the official did not want to be identified.

Even though the country's leader, Senior Gen. Than Shwe, has signaled that transition would soon be under way, he has given no date for the upcoming national elections -- the first such vote in two decades.

Critics believe that Myanmar's announced elections are intended only to create a facade of democracy.

Myanmar, formerly known as Burma, has been under military rule since 1962.

The so-called Group of Friends on Myanmar, an informal group of 14 countries and the European Union, are unhappy with the junta's lack of progress toward establishing a fair and transparent election process.

The upcoming vote will be the first since 1990, when opposition candidate Aung San Suu Kyi won by a landslide. The junta refused to recognize her party's victory.

Suu Kyi, the iconic face for democracy in Myanmar, has been kept under detention for 14 of the past 20 years.

The junta has said that Suu Kyi would be barred from participating in this year's election.

The Political Parties Registration Law, announced in state-run newspapers, excludes electoral participation by any member of a political party who has been convicted in court.

Her political party, the National League for Democracy, has said it will not register under a new election law and will not participate in the election.