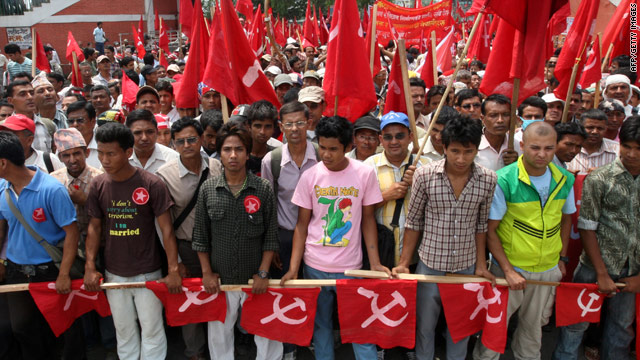 Nepalese workers affiliated to the Unified Communist Party of Nepal rally in Kathmandu on May 1.
STORY HIGHLIGHTS
RELATED TOPICS

Kathmandu, Nepal (CNN) -- Maoists in Nepal have threatened an indefinite general strike starting Sunday in a bid to force the country's prime minister to resign.

On Saturday, Maoist leader Pushpa Kamal Dahal "Prachanda" said if the government does step down, he will become the new prime minister.

However, minutes after Dahal spoke to CNN, Prime Minister Madhav Kumar Nepal urged the Maoists to cancel their protests in a televised address that also called for dialogue, indicating he will not resign.

Nepal became prime minister in June after Dahal resigned following a row over the sacking of the army chief.

In a show of strength and as part of May Day celebrations, Maoists brought tens of thousands of people from different parts of the country for a protest rally on Saturday.

"Our minimum demand is the formation of a national government for peace and a constitution," Dahal told CNN. "I am confident that a conducive atmosphere will be built in a couple of days to build consensus."

Read the account of CNN's Sara Sidner among the protesters

The Maoists and governing coalition have been in intense consultation in the past few days without a resolution.

The protests come as Nepal passes through a difficult political phase with the deadline to draft the constitution coming at the end of the month.

Nepal's parties also need to decide on the future of the U.N.-verified 19,000 Maoist combatants.

The Maoists fought a 10-year insurgency that ended in 2006 after a peace deal. The constituent assembly elected in 2008 declared Nepal a republic after centuries of monarchy. Maoist supporters marched to the center of the city where Dahal addressed the protesters.

"The strike from tomorrow is our compulsion," he said "All political changes in the country have come from the streets." "People's movement is the most sovereign."

He also came down on India for interference in Nepal's internal affairs and said the government's tone had changed after the prime minister met his Indian counterpart Manmohan Singh in Bhutan at a regional summit last week.

"It is clear whose language they are speaking after he returned from Thimpu," he told the rally.

In the interview with CNN later he explained, "[Our party's relationship] with India is not so warm."

About 15,000 riot police were deployed around the city Saturday for the protests, but they were peaceful.

Police said 60,000 people came to Kathmandu from all across the country for the rally, but the Maoists put the figure at 250,000.

The protesters shouted slogans asking the "puppet" government to resign and that they were ready to fight a war if the party ordered them to.

Nepal spent the bulk of the 15-minute address blaming the Maoists for not adhering to past agreements. The coalition parties want the Maoists to disband its paramilitary wing the Young Communist League and return properties seized during the insurgency to their rightful owners.