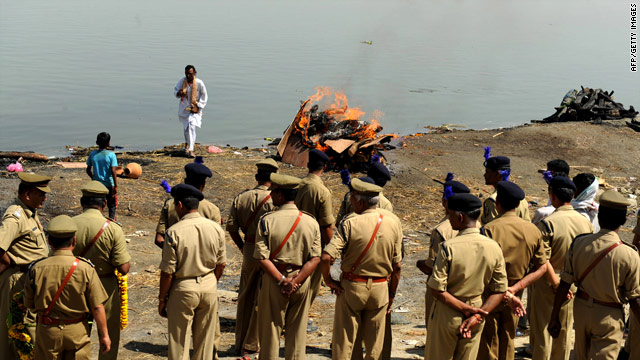 Indian police pay tribute to fallen soldier Ranjit Kumar Yadav during his cremation ceremony on the outskirts of Allahabad on April 8 after Maoists rebels killed 76 police in an attack.
STORY HIGHLIGHTS
RELATED TOPICS

New Delhi, India (CNN) -- A human rights group has slammed India for its warning to citizens supporting Maoist rebels, who are considered the greatest internal security threat by the nation.

India's home ministry said Thursday that nonprofit groups and intellectuals found helping the banned insurgents spread their ideology would be prosecuted under the country's laws.

But the U.S.-based rights group decried the warning as an attempt to silence political speech.

"The Indian government should think twice before trying to silence political discussion and demanding endorsement of its views on Maoist groups," said Brad Adams, Asia director for Human Rights Watch.

The rights group warned that the government should not equate what it called peaceful political speech with criminal acts while conducting its operations against armed Maoists.

Residents of Maoist areas are often caught up in the war between rebels and security forces, according to Human Rights Watch.

India has outlawed Maoist rebels and considers them terrorists.

The rebels aim to overthrow the government and "have no place in India's parliamentary democracy," the federal home ministry said.

Indian officials insist that the left-wing insurgents are hampering development in areas under their control, killing innocent civilians and destroying infrastructure.

However, authorities admit that the Maoists, who claim to be fighting for the dispossessed and the downtrodden since the 1960s, enjoy support from not just the poor, but India's elite as well.

"Despite its sanguinary nature, the (Maoist) movement manages to retain the support of a section of the tribal communities and the poorest of the poor in many affected areas," prime minister Manmohan Singh said last year." It has influence among certain sections of the civil society, the intelligentsia and the youth.

Singh said that the nation's fight with the rebels had fallen short of its objectives.

Thursday's government warning came a month after suspected Maoist militants carried out one of their most daring assaults on security forces, killing more than 70 officers in the eastern state of Chhattisgarh. About 200 armed federal police were conducting a road inspection when they were ambushed by Maoists in Dantewada district, authorities said.

In February, home minister P. Chidambaram said more than 900 people, including almost 600 civilians, were killed in Maoist-related incidents in 2009.

In addition to targeting authorities, alleged police informers and people they call "class enemies," the rebels are also said to attack infrastructure such as roads, bridges, railways, and power and telecommunication networks.