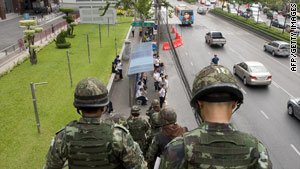 Soldiers patrol the streets around the area of the "Red Shirt" fortified camp in Bangkok on Wednesday.

Bangkok, Thailand (CNN) -- Thai authorities delayed carrying out their threat to shut off power, cut supplies and seal off at midnight Thursday a central Bangkok intersection where anti-government protesters have amassed by the thousands for the last month.

The plan to shut facilities around the protest area was postponed from midnight (1 p.m. ET Wednesday) because the Centre for the Resolution of the Emergency Situation in Bangkok was working to limit the impact on area residents, said Panitan Wattanayakorn, acting government spokesman.

No new deadline was set.

The government's threat had come after demonstrators disregarded an ultimatum by Prime Minister Abhisit Vejjajiva to vacate the Ratchaprasong intersection by Wednesday.

The anti-government United Front for Democracy Against Dictatorship (UDD) has turned the posh commercial center into a fortress of tires and bamboo sticks, as they continue their demand that Abhisit dissolve the lower house of the parliament and call new elections.

The government had threatened to cut off water, power, telephone lines and transportation services in the area.

The government announcement was met with defiance by the UDD, whose supporters are called the "Red Shirts" because of the clothes they wear.

"The Red will continue staying in the area," said a party leader, Weng Tojirakarn. He cautioned the government against acting rashly, warning it could lead to "bloodshed."

The Red Shirts are supporters of former Prime Minister Thaksin Shinawatra, who was ousted in a bloodless military coup in 2006.

He said Abhisit had mentioned that the proposed date for the new election had been made with the condition that the Red shirts stop their protests. "He never said he withdrew his proposal," Panitan said.

Over the weekend, two Thai police officers were killed and eight people injured in violence that began Friday night and lasted into early Saturday.