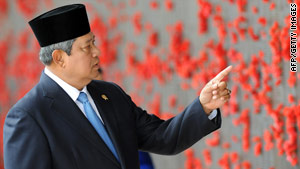 Indonesian President Susilo Bambang Yudhoyono is alleged to be the target of an assassination plot.
STORY HIGHLIGHTS
RELATED TOPICS

(CNN) -- A series of anti-terror raids helped foil an assassination attempt on the Indonesian president by militants, the national police chief said Friday.

"Based from our investigation and the confessions of arrested terrorist suspects, we know that their target was to assassinate the president (Susilo Bambang Yudhoyono) and other high-ranking state officials and guests," said Chief Bambang Danuri, the indonesian police chief.

Indonesian police conducted a series of raids in recent months on groups suspected of having ties to al Qaeda Aceh, a militant Islamic organization that has operated a training camp in the majority-Muslim Indonesian province of Aceh.

Police have killed 13 suspected terrorists and arrested 71 others since February, and have confiscated scores of weapons and ammunition for AK-47s and M-16 rifles.

Al Qaeda Aceh is an offshoot of Jemaah Islamiyah, the group behind the deadly 2002 bomb attacks on Bali and a pair of 2009 bombings at Western hotels in Jakarta.

Police also learned that a recently-raided militant camp had been headed by Dulmatin, the suspected terrorist behind the Bali bombings who was killed by Indonesian police in March.

"This discovery signifies that the terrorist groups have changed their tactics from bombing to armed attacks," the police chief said.