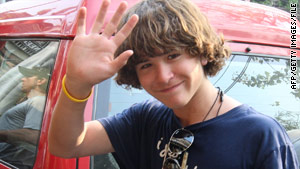 CNN -- A 13-year-old American became the youngest climber to ever summit Mount Everest on Saturday.

Jordan Romero's journey was tracked through GPS coordinates on his blog, logging his team's ascent up Everest, which is 29,028 feet (8,847 meters) above sea level.

"Their dreams have now come true," a statement on Jordan's blog said. "Everyone sounded unbelievably happy."

Before Saturday, the youngest climber to scale Everest was 16-year-old Temba Tsheri of Nepal.

"I know you would like to hear from the boy himself, but he is currently flat on his belly knocked out," a member of Jordan's climbing team said in a message posted Saturday on his blog. "The effort he put out this last more like 48 hours is -- you're not going to believe the story when you see it and read about it."

Romero left for the peak from the Chinese side of the mountain after Nepal denied him permission on age grounds, according to nepalnews.com.

Before starting out, Romero, of Big Bear, California, said he wanted to climb Everest to inspire more young people to get outdoors.

"Obese children are the future of America, the way things are going," he said on April 9 in Kathmandu. "I am hoping to change that by doing what I do: climbing and motivational speaking."

With a smile, he added: "I am doing this a little for myself, too, to do something big."

Jordan now has climbed six of the seven highest peaks on seven continents, known as the Seven Summits.

"This is not an isolated vacation," said Paul Romero, Jordan's father, before the two embarked up Everest in Nepal. "This is a lifestyle."

Romero's family started tackling the Seven Summits in summer 2005. He was just 9 when they climbed 19,341 feet (5,895 meters) to the peak of Mount Kilimanjaro in Tanzania.

There is a debate about whether the tallest mountain in Oceania is Kosciuszko in mainland Australia or Carstensz Pyramid in Indonesia, so Romero and his family climbed both.

The only peak left for him to climb after Everest is the Vinson Massif in Antarctica, which is 16,067 feet (4,897 meters). A trip there is planned for December.