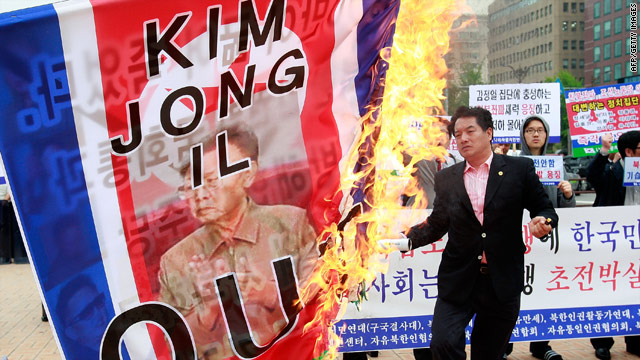 South Korean protesters burn a North Korean flag featuring a portrait of Kim Jong-Il during a rally in Seoul on Tuesday.
STORY HIGHLIGHTS

(CNN) -- Mounting tensions on the Korean Peninsula reached a new level Tuesday as a North Korean agency announced that the communist nation is severing all ties with its neighbor to the south and will "abrogate the agreement on non-aggression."

A spokesman for North Korea's Committee for the Peaceful Reunification of Korea accused South Korean President Lee Myung-bak of falsely blaming Pyongyang for the sinking in March of the South Korean warship Cheonan, according to the state-run Korean Central News Agency.

An official South Korean report accused the communist North of firing a torpedo at the ship, killing 46 sailors.

Meanwhile, a North Korean military official accused the South of intruding into North Korean waters in the Yellow Sea from May 14 to May 24, the Yonhap news agency reported.

Video: Tensions between the Koreas

While in China on Monday, U.S. Secretary of State Hillary Clinton said the United States supports the finding on the Cheonan's sinking.

She urged North Korea on Monday to reveal what it knows about the "act of aggression." She also said the United States' "support for South Korea's defense is unequivocal" and that North Korea should "stop its belligerence and threatening behavior."

"We endorse President Lee's call on North Korea to come forward with the facts regarding this act of aggression and, above all, stop its belligerence and threatening behavior," Clinton said.

The Committee for the Peaceful Reunification of Korea, the group that is in charge of relations with South Korea, said in its statement Tuesday that it would consider South Korea's "smear campaign over the sinking of the warship as a declaration of a war."

It said the North would "mete out a merciless and strong punishment," KCNA reported.

Among the committee's recommendations:

-- That all relations be severed and inter-Korean issues be handled under wartime laws.

-- That dialog between North and South be halted during Lee's tenure.

-- That all communications between North and South be cut off.

-- That South Korean ships and airliners be banned from passing through North Korean territorial waters and airspace.