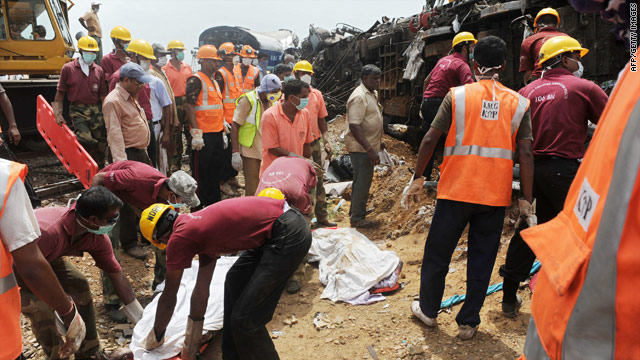 New Delhi, India (CNN) -- Investigators were searching for bodies in a mangled wreck Saturday, a day after two trains crashed and killed at least 98 people in eastern India, officials said.

Maoist rebels are suspected of causing the crash by removing the fasteners securing the tracks, police said.

Authorities identified some suspects, but had not yet made any arrests, said Bhupinder Singh, police chief in West Bengal state. He said "quite a few" people were involved.

At least 115 passengers were injured when 13 cars of the Mumbai-bound Lokmanya Tilak Gyaneshwari Express derailed, capsized on a parallel track and were slammed by a cargo train, authorities said.

More than a dozen bodies may still be trapped inside the wreckage, said N.S. Nigam, West Midnapore district magistrate.

"It appears to be a case of sabotage where a portion of the railway track was removed. Whether explosives were used is not yet clear," Indian Home Minister P. Chidambaram said in a statement Friday.

Manoj Verma, the district police superintendent, said Friday that investigators were looking into the possibility that "fishplates," which secure rail joints, were missing from the track.

The role of Maoists "cannot be ruled out," Verma said.