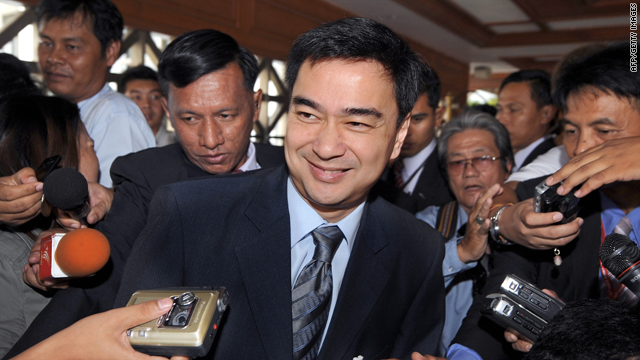 Thai Prime Minister Abhisit Vejjajiva smiles as he answers question from the press after the no-confidence vote at Parliament in Bangkok on Wednesday.
STORY HIGHLIGHTS
RELATED TOPICS

(CNN) -- Thailand's Prime Minister Abhisit Vejjajiva survived a no-confidence motion in parliament on Wednesday, with 186 voting to censure him and 246 against the action.

Lawmakers had called a special session Tuesday to debate the motion against Abhisit and five of his Cabinet members, accusing them of using excessive force against anti-government protesters during a crackdown on May 19.

Abhisit denied the allegations and reiterated that most of the deaths would not have taken place if there were no "armed terrorist elements" mingled among the innocent protesters.

The prime minister said the government will set up an independent group to investigate whether police used undue force.

The crackdown followed days of skirmishes between police and anti-government protesters, the Red Shirts.

During the course of the protests, clashes between police and protesters left 88 people dead: 77 civilians, and 11 soldiers and police officers.

The United Front for Democracy, the formal name of the Red Shirt opposition, had been demanding that Abhisit dissolve the lower house of Parliament and call new elections. The Red Shirts support former Prime Minister Thaksin Shinawatra, who was ousted in a 2006 bloodless military coup.

Abhisit was all but certain to win the no-confidence motion because his government holds the majority of seats in parliament.