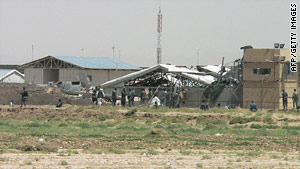 Two of the dead were Australians killed by a blast during patrol in the Mirabad Valley of southern Afghanistan acting Australian Defense Minister Greg Combet said. They were the first Australian service personnel killed in Afghanistan in nearly a year.

The exact locations of the remaining fatalities were not immediately released, though NATO's International Security Assistance Force confirmed that seven of them were Americans. The nationality of one of the troops also was not known.

In addition, the U.S. Embassy in Kabul said an American citizen and another person died in an attack on a police training center in Kandahar.

"Our sympathies go out to those who lost loved ones in this callous attack. The United States will continue to stand with our Afghan partners to fight terrorism and help the Afghan government provide security, safety and prosperity to its people," the embassy said in a statement.