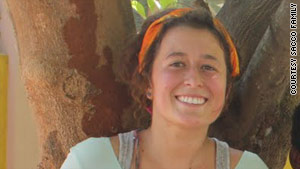 Aubrey Sacco was last seen at a hotel in Nepal's Langtang National Park on April 22.

(CNN) -- Three weeks into his personal search for his daughter in Nepal, Colorado lawyer Paul Sacco keeps running into this: The last trace of 23-year-old Aubrey Sacco was at a hotel a day after she began hiking in the Asian country in April.

Still, Paul Sacco plans to keep looking, buoyed by his belief that someone must have noticed the outgoing, 5-foot-tall artist and yoga instructor sometime after that. He also was given hope by the local Buddhist monks, who tell him they sense she's alive and still in Langtang National Park.

He says that he, too, feels she's still waiting to be found.

"I have a strong connection to her. Sometimes a family member can feel if a person is dead or in pain, like intuition. I have a very strong feeling that she's alive," Sacco said in an interview from Kathmandu via Skype this week.

Aubrey Sacco, of Greeley, Colorado, was on a five-month solo post-college trip through Sri Lanka and India when she told her family she'd gone to Nepal. The 2009 University of Colorado graduate said on April 20 that she'd be hiking alone in Langtang National Park at the base of the Himalayas north of Kathmandu, and would check back with them around April 29, according to her family.

Having not heard from her, the family started contacting the U.S. Embassy in Nepal around May 4. Embassy officials put missing-person posters in the airport and tourist areas and asked police and the Nepali military to start searches, according to embassy spokeswoman Nicole Chulick, and the Sacco family made contacts with other people in Nepal who also started looking.

On May 19, Paul Sacco, one of his sons and a Nepali family friend who lives in Colorado arrived in Nepal to monitor and help coordinate efforts. Through discussions with investigators and witnesses, the Sacco family says it has learned this:

• Aubrey left a Kathmandu hotel on April 20 and took a bus to Langtang National Park. She left the belongings that she wouldn't be hiking with -- like luggage and a computer -- at that hotel and never came back for them.

• Aubrey started her trek on April 21 and stayed the night at a hotel in the park. There, she spoke with a trekking guide, and they talked about opportunities for her to volunteer with schoolchildren in Kathmandu after she finished the hike, according to her mother, Connie Sacco, who is following events from Colorado.

• The guide says he saw Aubrey continue her hike on April 22. That day, a different hotel farther along the trek has a record of her having tea -- her last known location, according to Paul Sacco.

"What is very frustrating is that according to all the park's records, she just disappeared [after that tea]," Paul Sacco said. "There is no hard evidence as to where she is."

Sacco has speculated that Aubrey, at the end of her trek, might have had trouble finding a bus back to Kathmandu because of disruptive Maoist protests against the government in the capital in the beginning of May, and that she might have stayed in the park or tried to hike all the way back to the capital.

The family has offered a reward of 100,000 Nepali rupees (roughly $1,320, which experts told him was a good amount) for information leading to her discovery. Nepali police and soldiers continue to investigate and search, as do volunteers, including villagers who are helping at the urging of two Maoist leaders, Sacco said. Sacco, his son and family friend also have searched the trails for days.

The family also is working with private search-and-rescue teams, and the embassy this week helped arrange a local TV interview with Sacco to spread the word of Aubrey's disappearance, Chulick said. The embassy also has helped Sacco connect with Nepali authorities after he arrived, and a deputy of the embassy's consular section accompanied Sacco on one of the search missions, according to Chulick.

Sacco, who said he is grateful for all the help, said perhaps three-quarters of the park's hikable terrain has been searched. He now hopes to focus on a region through which Aubrey would have hiked had she decided to make a seven-day walk back to Kathmandu.

He said that, partly because Aubrey is a student of yoga and Eastern philosophy, he has consulted with Buddhist monks who claim psychic ability, including those who are said to have pinpointed missing hikers in the past.

"The general consensus among these people is that she is alive and she's in the park," he said.

That helps keep Sacco going in Nepal, where he is hosted by an American, Scott MacLennan, who is executive director of the Mountain Fund, a humanitarian organization that combats poverty in developing mountain communities. Sacco met MacLennan after Aubrey disappeared, and MacLennan has been helping the family conduct the search, Connie Sacco said.

On her Asian trip, Aubrey taught and took yoga classes in Sri Lanka, and volunteered at schools in India, helping them with art and music, her family said. She kept a blog of her travels; the last entry came on April 15.

"This is not an irresponsible traveler," her mother said. "She embraces the culture wherever she travels. She's the one you'll usually find with the villagers as opposed to the high-end places. She wanted to learn about places where she could volunteer."

"Her motto is 'glitter the world,' and she just glitters with her love and energy," Connie Sacco said.

Paul Sacco is able to do some of his law work from Nepal. His son, a law student, has put off an internship to look for Aubrey. Sacco said he'd stay there "as long as I feel I can be effective."

He said someone in the park must have seen her after the April 22 tea, and urged anyone with information to contact the family at findaubreyglitter@gmail.com or through a Facebook page dedicated to the search.

"She's bubbly and funny. Anybody who saw her is going to remember her," he said.