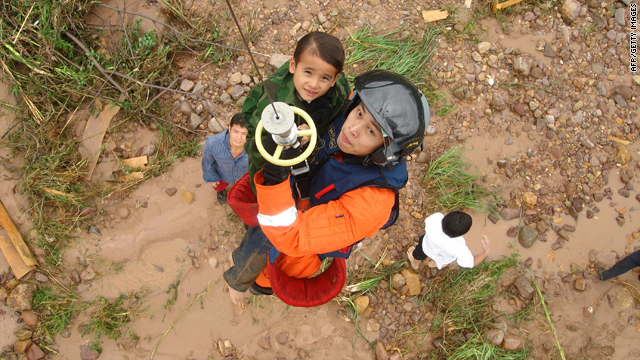 A member of the Chinese airforce holds on to a child during the airlifting of a group of villagers who were trapped after their village was hit by flooding in Jinxiu, southwest China's Guangxi region.
STORY HIGHLIGHTS
RELATED TOPICS

The Chinese Ministry of Civil Affairs announced on its website that more than 238,000 people had been evacuated from their homes in the regions of Fujian, Guangdong, Hunan, Jiangxi, Guangxi and Sichuan, Xinhua reported.

More than 33,000 homes had been destroyed in the affected areas and the agency estimated the economic loss at $398 million (2.72 billion yuan), Xinhua said. The worst-hit regions were Fujian, Guangxi and Sichuan.